Summer's end is near

Here it is, September 1, and it seems that summer just started. We've had a number of very nice days, but right now the sky is cloudy and there have been periods of rain - nothing overwhelming, but enough to keep the garden watered. The gardening service we use has done the trimming of the hedges and trees. This is a once-a-year activity; it heralds the arrival of autumn.

My astronomical activities included participation in the Metro Vancouver Parks activities (Perseid meteor shower public night at the Aldergrove Park, Deas Island Island Regional Park, public and RASC activities at SFU's Trottier Observatory, etc.) I also did some solar observing, using my own H-alpha telescope. The sun never looks the same from one day to the next since this type of telescope shows the sun in hydrogen light (it looks red and shows the prominences, flares, sunspots in nice detail).

Perhaps there will be more sunny days as summer recedes.

I'm looking forward to next year's solar eclipse in Oregon. There will be discussions at the next RASC Vancouver council meeting for a member viewing trip to watch the eclipse. I mentioned the eclipse in my previous post.
By JKM at September 02, 2016 No comments:

Since my last post in April, we spent almost the entire month of May in California. Before our trip there, my wife and I spent the day of May 3 in memory of our son Derek, who died on that day in 2011. That day will never be a happy one for us.

A couple of days later we took the car to get to San Diego, with a stop along the way to visit a good friend in Chico, California. We also happened to stay a couple of nights at a Hilton-Hotel-affiliated place called Homewood Suites. We found them to be very "user-friendly", with courteous and efficient staff, and breakfast and happy hour included in the very reasonable price of the rooms.

Our San Diego stay was with friends we've known for almost 40 years, and whose house is almost like a second home to us - we've stayed there so often. By chance, we arrived at the time when the host's nephew and a home-town friend (both of whom live in Germany and who are also our friends) were also staying at the house. These two left a couple of days after we arrived, but we had a chance to get up-to-date.

Our host is dealing with some age-related medical issues; we had come to help keep an eye on him during the time that his wife attended a family reunion in Germany. There are always local friends and neighbours dropping in too, so our time there was never boring; we've gotten to know most of these people during the years we have visited there.

On the way back, we stopped for the first night in Fresno, the next in Medford, and spent a couple of hours at Crater Lake, where we had deposited a small part of our son's ashes two years ago, following the wishes he had first expressed in 2007 (http://www.penmachine.com/2007/07/my-favourite-places-and-when-to-take-me). The day was cold (4 degrees C), but sunny. There was still an appreciable amount of snow, and the road around Crater Lake was only partially open.

Here are a couple of pictures: 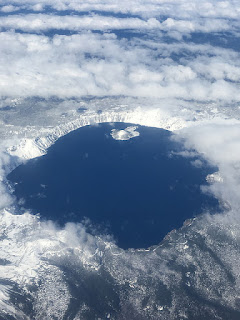 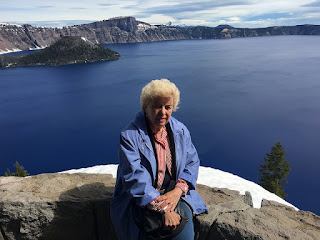 We dispersed some of Derek's ashes here in June 2014.
We left Crater Lake around noon and drove north on highway 97 to Madras, Oregon. This is one of the places almost exactly on the centre line of the path of the August 2017 total solar eclipse. It will be the first total solar eclipse in North America since 1979. As expected, all the hotels in Madras are already fully booked for the eclipse, but the area around the city is quite flat, so the eclipse path (which is a couple of hundred kilometres wide) is accessible in a wider area. Google "Solar eclipse 2017" and you'll get all kinds of information links. 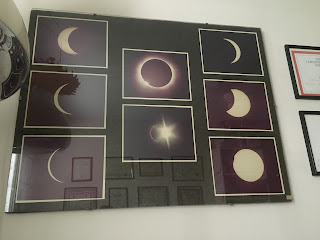 The solar eclipse pictures I took on February 26, 1979 (in Winnipeg - the "diamond ring" picture was taken by Neil Laffra on Hecla Island in Lake Winnipeg). At the time I had a complete darkroom in our basement where I developed the film and prints, and mounted them as shown. They have been hanging on our wall since then.
We spent our last night in Portland, Oregon, and, after battling the always busy traffic in Seattle, got home at a reasonable hour.

Since then, I have been active with my astronomical endeavours, meetings, and Royal Astronomical Society of Canada Vancouver Centre public events. The most recent was the celebration of Canada Day in Haney (unfortunately, not a sunny day). However, our various telescopes served as exhibits for the several hundred people who stopped by for a look through some of the telescopes and the free informational handouts. 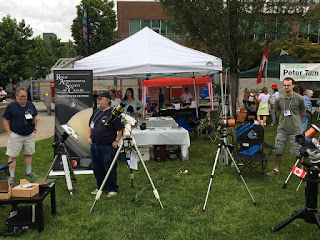 
My last post was written about two months ago. In the meantime, I've been busy with various astronomical activities. There have been public nights at Simon Fraser University to which the Vancouver Centre of the Royal Astronomical Society of Canada members set up telescopes at SFU's Trottier Observatory to help with the long lineup for the observatory's 0.7m PlaneWave telescope. This event (Starry Nights at SFU - organized by SFU Professor Howard Trottier) attracts hundreds of people.

When asked, the RASC Vancouver also sets up displays at Vancouver's Telus Science World, and telescopes at various schools around the Lower Mainland. The intent is to expose both students and teachers to the wonders of the night sky, and also use solar telescopes to observe the sun during the day. There is always a lot of interest and we are often asked to repeat these events. I enjoy taking part.

A week ago, we flew down to Los Angeles for a few days, to take part in an 80th birthday party for a our good friend Adolf Wegmann, whom I have known for almost 60 years. Unexpectedly,  and to everyone's shock, Adolf died three days before the party - it appears to have been a heart attack. He had organized this get-together to the smallest detail; so his wife Andreia decided to go ahead anyway. Instead of Adolf's birthday, we celebrated his life. He was an accomplished tool and die maker, travelled the world for the packaging company he worked for, operated a gun business for many years and was a true outdoors man; camping was his big joy. I have known his two daughters since they were born. Adolf had many friends around the world and lived a full life. All of us will miss him.

No snow this year.


So far this winter, we've had no snow to shovel. Yes, there has been the odd dusting, but judicious use of "presalting" kept the sidewalks clear and prevented "black ice". What little snow there was usually melted away by mid-day. Right now, as I type this, we've had a local shower, but the sun is  shining through the clouds with a nice rainbow visible right through our front window: 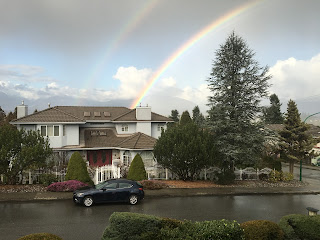 Usually, when snow is more plentiful, shoveling is required. On those occasions, I wish the snow would stay in the local mountains, where it belongs. Well, this year that's what seems to have happened. There is a lot of snow in the mountains; the local ski hills have been open since November and are going strong.

There have been few clear nights for astronomy. None-the-less, I have been involved in a couple of related activities. At Telus Science World, the RASC (Royal Astronomical Society of Canada) Vancouver Centre sets up displays once a month for scheduled high school classes from various local and province-wide schools. We have videos, telescopes, handouts, and answer inquiries from teachers and students alike, which may result in setting up in-school astronomy events for those schools. We also give talks to a groups of girl scouts and boy scouts, again with telescope displays. If the weather permits, we use either one or more solar telescope or, after dark, regular telescopes to look at planets, the Moon, star clusters and nebulae.

Last Friday (unfortunately it rained again), I had made arrangements with Professor Trottier to show our two granddaughters the new Trottier Observatory at Simon Fraser University.  Howard Trottier is professor of physics at SFU, and the Trottier foundation donated the funds for the observatory and the Trottier Studio for innovative science education at SFU. Professor Trottier is also a past president of the RASC Vancouver Centre (as I am) and originated Starry Nights at SFU, in which the RASC participates with its support. Here are some pictures: 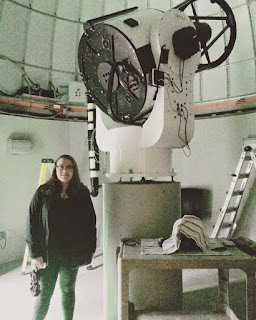 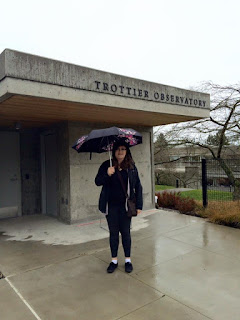 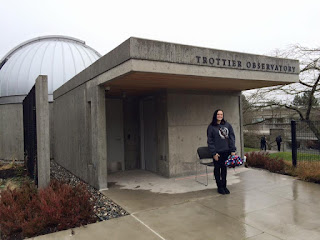 As you can see, no snow (but plenty of rain).


In October of last year (http://www.penmachinedad.blogspot.ca/2015/10/back-to-reality.htm) I posted some comments about our trip to Germany. At the beginning I mentioned our visit to my mother's younger sister, 102 years old at the time, the only one of six siblings still alive.

She died a week ago of congestive heart failure (the same disease caused my mother's death fourteen years ago). Apparently, she contracted a severe case of pneumonia and developed a painful circulation blockage in her right arm. She also refused food and drink and died four days after admission to hospital.

From the odd comments my mother made over the years, we know that this sister and my mother were no wallflowers. In the early 1930s the two of them would often visit Berlin's cabarets, pubs and other entertainment venues and had a pretty active social life. They probably made Berlin unsafe for the men of their generation (my mother only chuckled when I once mentioned my thinking in that regard). It was likely the best time of their lives; this was all counterbalanced when they suffered great adversities during and after the second world war.

Both my mother and her sister had a full life. Most of their generation are now gone; it is a natural progression of life, but still sad.

Update: Just this morning, I received an email from my Austrian cousin that her mother (my father's sister) has also died (age 94) after having dealt with dementia for several years. We last saw her in 1983, when she came here for a visit. She was the last one of her generation in our family.

A sad start for this year...