In November, 2007 I enrolled in Rogers' portable internet operation and promised at the time that I'd post something about my ongoing experience later. Well, here we are, a little over four months later, and I'll give you a quick rundown.

Overall, the system has worked. I can recall only one down period, and it didn't last long. Since portable means wireless, the system involves a wireless modem. The signal frequency spectrum is fairly high (in the gigahertz), and for that reason it behaves more like light. This means that you need a more-or-less direct "line of sight" to the transmitter. Personally I don't know where the transmitter to which my modem is "talking" is located, but I get a reasonable strength signal, as indicated by a series of LED's on the modem.

This signal strength appears to be influenced by the weather. I have noticed that, when snow is falling, or when it's raining heavily, the number of active lights on the modem goes from a normal of 4 to 2, sometimes even just one. This seems to affect the connection speed (bandwidth) to some degree. I notice a slowdown especially if I'm watching an on-line movie (for instance, shuttle launches, other NASA "live" broadcasts, or Derek's podcasts). At that time, the buffers on my computer don't load up quickly enough, and the display "stutters".

What accentuates this problem is the in-house networking setup I have. I connect about 4 different computers through a wireless router, which in turn is connected to the wireless modem. In order to maintain security, my network signals, at least those which go "through the air" are all encrypted with WPA keys (some of my computers connect to the router by RJ45 Ethernet cables). The wireless router has to deal with the encrypted signals and other overhead, such as address translations - as do the computers - and that takes time (very short by human standards, but not in the world of computers). In addition, I also have the standard antivirus, firewall, and adware programs running which "analyze" the signals before accepting them. This all contributes to slowing down the received signals.

I've found the speediest reception when I connect one of my laptops directly to the wireless modem via the built-in network card. This connection does not use WPA keys and security is a matter of both my own, and Rogers' protective software arrangements. In most cases, this "wired-to-wireless" connection allows the buffers to "outrace" the playback speed of the movies; you can see the buffer indicator move faster than the playback marker.

So, in my opinion, if portability or independence from wired Internet supplier (ISP) connections is a requirement for you, or if you are unhappy with your current ISP supplier, this wireless arrangement may be useful. The connection speeds are not "blazing", but they are acceptable. If download speed is critical for you, then a wired connection (cable, say), may be better.
By JKM at March 31, 2008 No comments: 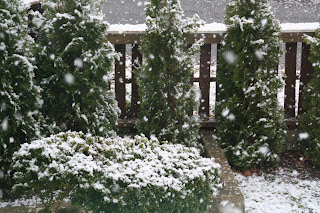 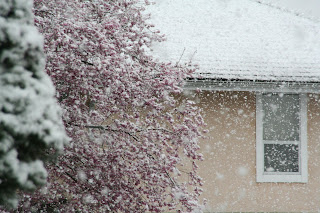 This is "a spring day" in Burnaby. It's been snowing all morning. Should this keep up, people will have to "scrape the global warming off their cars", as one eastern reader's mail to McLean's magazine stated a couple of weeks ago. I don't expect the snow to last - but at the moment it's building up. So far, spring has been quite a bit cooler than average here this year, but considering what the East has had to go through, I'll not complain.
By JKM at March 28, 2008 No comments:

It may surprise many people, but binoculars have a very useful niche in the application of "visual" astronomy. Galileo would have given his eye-teeth for this kind of "telescope", which binoculars are (actually binoculars are two identical telescopes, one for each eye). Be that as it may, I always use binoculars when I'm out, doing astronomy. As I've gotten older, I have developed a less steady hand; I've found that the tiny tremours in my hands have now come to a stage at which the fine details of what I'm looking at are hard or impossible for me to see. Tripods cure this problem, of course, but they tend to make it awkward to "point-and-look", when checking out the familiar objects in the sky (or on earth, for that matter).

Because of this, I decided to buy yet another pair of binoculars - but this time with the "image stabilizer" option. I opted for a pair of Canon 15x50's (picture at left). This means that the magnification power is 15 and the front lenses are 50mm in diameter. 15 power is normally considered to be beyond the "handheld" range of powers (7 - 10 power is traditionally recommended). However, with the stabilization mode on the Canon binoculars turned on, free-hand use is a real pleasure. The little jiggles disappear, and details become far more obvious.

I'm looking forward to a clear night, so that I can use these binoculars "astronomically", particularly away from the extremely light-polluted sky in this city.
By JKM at March 26, 2008 2 comments:

A date with Easter

Ever since the Council of Nicea "fixed" the date for Easter, it has almost always occurred at different dates from one year to the next. By the council's definition, Easter occurs on the first Sunday after the first full moon after the spring equinox (which we call the beginning of spring).

If the full moon had occurred even just one second before equinox, we would have to wait a full lunar cycle to the Sunday after the following full moon (29.5 days from one full moon to the next, approximately, called a Synodic month) for Easter to happen. If that full moon were to happen on a Monday, we'd have to wait an additional six days to get to the next Sunday - Easter. You do the math for each particular year of your interest.

I'm not addressing the religious aspects of Easter here. It's obvious to me that the Easter date is totally artificial and man-made. But it's interesting to me, because it has to involve astronomical observations and calculations (as most of you who read this blog know, one of my hobbies is Astronomy). The whole thing is an outgrowth of man's preoccupation with the concept of "time" (another anthropocentric idea).

If you're interested in the more detailed aspects of the lunar orbit and the concepts behind our definition of time, an excellent source of information is the "Observer's Handbook", published by the Royal Astronomical Society of Canada. For quick and detailed references, this handbook is used worldwide by amateur and professional astronomers alike. I took the times and dates information above from that handbook.
By JKM at March 21, 2008 3 comments:

Back to the cold 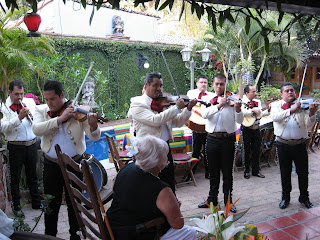 My wife and I spent more than a week with friends in Puerto Vallarta, in honour of one of our friend's 80th birthday. A good time was had by all. Mariachis played at the festivities, and everyone enjoyed the renowned Mexican hospitality.
We timed our trip in order to be back when Derek was scheduled for his next chemo treatment (he's suffering the side effects today). It's amazing and encouraging to hear that a number of the people present either had had colon cancer themselves or know people who did. Our 80 year old friend also battled this disease some years back; he knows better than most of us what Derek is going through. What's encouraging is that they are all still alive to tell the tale.
We read Derek's blog while there when we had access to the internet. It kept us just as informed as all other readers of his blog regarding the state of his fight - as his parents, we have a special interest. This is certainly an instance where the internet shines.
Puerto Vallarta is far from the little fishing village it was before the film "The Night of the Iguana", starring Liz Taylor and Richard Burton was made there. Today, P.V. is home to about 400,000 people, and new condos are going up at an unprecedented rate. We had the opportunity to look at a couple of condominium apartments being built next door. They each are 3000+ square feet - 3 bedrooms, 3 bathrooms, a 650 square foot "balcony", in a building with about 170 of them, on the waterfront with a terrific view, and start at about US$570,000. I'm not sure what this will do to the truly Mexican lifestyle in this area, but you can't stop progress - after all, it's happening here, too.
By JKM at March 13, 2008 No comments: 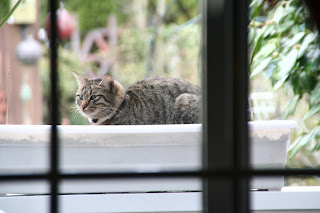 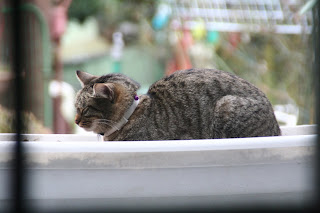 Yesterday, one of the neighborhood cats decided to settle in one of the flower boxes on our back porch. All the comforts of home? In any case, we're glad to accommodate the regional mouser; it seems that we don't have any rats or mice with which to contend. Perhaps this is due to the cat's vigilance. 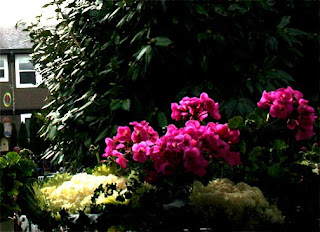 Maybe the cat's been visiting for a long time now, without us having noticed it before. Could it be that the nice flowers we have in that flowerbox in spring, summer, and fall owe their looks to the cat?
By JKM at March 02, 2008 No comments: