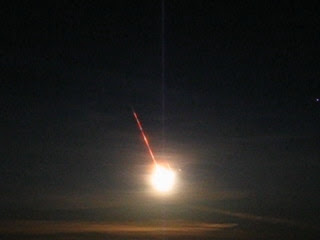 I haven't written a "letter-to-the-editor" type of note to the media in a very long time, but today I wrote one to the "opinion page" of our local newspaper. It concerns the meteor seen in the sky over Alberta and Saskatchewan on November 20 of this year. Here's the gist of my (expanded for this blog) note:

On Tuesday, Dec.23, page B2 - "Metorite fall could yield scientific gold" - the article regarding the Nov. 20 meteor seen in Alberta/Saskatchewan (picture at left), I read with great interest, and a sense of sad dismay, that the more than 100 meteorites collected are all "...part of a 10-tonne, 10-kilometre-wide meteorite that broke up on impact with the atmosphere, spawning brilliant flashes of light that caught many eyes" (from the 9th paragraph in that article).

To begin with, a meteorite is defined as that part of a meteoroid which is found on the ground after travelling through the atmosphere. A meteoroid is the solid, original body before it encounters the atmosphere. The process by which this body disintegrates when it travels through atmosphere and which results in the 'brilliant flashes of light', and other associated phenomena (heat, ionization, occasionally sound) is called a meteor.

If the meteoroid (taken as a cube to make the basic calculations easy) had indeed been 10 km (about 6.2 miles) diagonally across, it would have had a mass of millions of tons (around 500 million - roughly equivalent to 1 trillion pounds); it would have struck the Earth almost totally intact, and caused a conflagration similar to what many scientists think happened on the Yucatan peninsula 64 million years ago, with the subsequent extinction of many species. If the 10-ton mass (about 20,000 pounds - i.e. about three GM Hummers) is taken as approximately correct, then the meteoroid that hit us, again taken as cube, would have been about 1.6 metres along each side. The meteorites shown in the newspaper's picture with Dr. Hildebrand appear to be of a "stony" nature - approximately 2.5 times the density of water. 10 tonnes of water is equal to 10 cubic metres of water, by definition - 1 cubic metre of water is equal to 1 ton. A 10-ton cube of water would measure about 2.15 metres along each edge. The "stony" equivalent cube of stone would therefore be 1/2.5th of 10 cubic metres, i.e. about 4 cubic metres. This would be a cube measuring about 1.6 metres on each side. How can one equate 500 million tons with 10 tons, or a cube of approximately 5.8 kilometers (5,800 meters) along one edge to 1.6 meters along the edge, or a trillion pounds to twenty thousand?
In reality, of course, the meteroid would not be a cube, but of some irregular shape. That makes calculations like these far more complex, but there is no getting away from the masses of material and the orders of magnitude involved.

What dismays me is the apparent incomprehension of and lack of innate feeling for the relationships between size, mass, weight and other physical characteristics and properties of the things that surround us, perhaps mixed in with lack of understanding regarding the metric system. It is as though common sense has left the authors and/or editors involved in the kind of published nonsense seen in the media far too often.

I gain little consolation from knowing that this kind of "innumeracy" is all too common. Not a month goes by in which I don't see such misrepresentation and misunderstanding in the newspapers or other media. Is this due to a lack of teaching in school?
This whole thing may be of no interest to anyone, but I had to vent my spleen here.
By JKM at December 23, 2008 No comments: