As I mentioned yesterday, we spent a few days in Mexico (Puerto Vallarta) recently. During that time, and considering my interest in things astronomical, I took a picture of a loose alignment of three planets, and the Moon, visible for a short period after sunset. The planets were Jupiter, Mercury, and Venus (in order of increasing distance from the horizon). 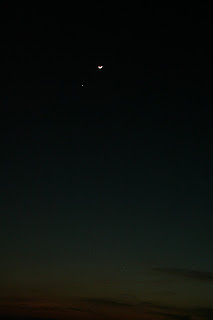 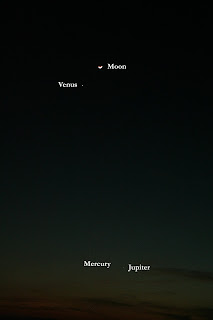 To see the details better, click on each picture.

Jupiter, the largest planet is closest to the horizon, actually seen through a light cloud. Mercury is slightly to the left of, and a little higher than Jupiter. The bright spot to the left of the Moon at the top of the picture, and somewhat lower, is Venus. The leftmost picture shows the actual scene; the right picture is the annotated version.

This is an interesting demonstration in planetary perspective. In this picture, Jupiter, the Solar System's largest planet (it has a mass equal to 318 times Earth's mass), is six times farther away from us than Mercury. Mercury is the planet closest to the Sun, Venus is next closest (our Earth is third) and Jupiter is the fifth of the major planets orbiting the Sun. Jupiter orbits five times farther out from the Sun than Earth. As shown in the picture, even that far away (we're talking about 900 Million km - 560 Million miles), Jupiter shows up brighter than Mercury. Mercury is around 160 Million km - 100 Million miles away. Venus (almost equal in size to Earth) is at this time about 110 Million km - 70 Million miles away. The closest is the Moon, "only" about 380 thousand km - 236 thousand miles away. 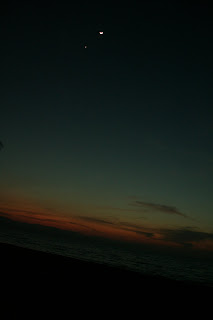 Quite apart from these scientific aspects, it was a pretty picture in its own right - certainly quite different from our wintery scene; the temperature at the time I took these pictures was about 22 degrees Celsius (72 F). On the left, you see a wider-angle view. Both Jupiter and Mercury are located to the left of the topmost dark cloud in the lower right (which seems to point straight to them).

We were staying with close friends, one block away from the beach, a couple of minutes' walk to this beautiful scene on Banderas Bay.