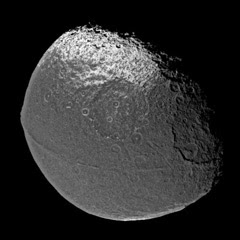 I have mentioned the amazingly successful probe Cassini, which is orbiting the planet Saturn, before. It recently passed very closely by one of Saturn's moons, called Iapetus. This moon can be seen with a telescope from Earth, as a tiny spot of light. It has the strange characteristic of appearing about five times brighter when we see it on one side of Saturn then when it is on the other side. This is caused by the unique fact that Iapetus appears to be "coated" with a very dark layer of dust on the "leading" hemisphere. That's the part of the moon which always faces "head-on" into the direction of its travel around Saturn. Iapetus has "captured rotation" with respect to Saturn, the same side of Iapetus faces Saturn, as this moon orbits it (this is true of our Moon as well, we never see the Moon's far side from Earth). Therefore, these moons (and others in the solar system) always rotate once in exactly the same time as they complete one orbit around their "mother planet", and the same part of the moon's surface is always "facing forward".

Another amazing aspect of Iapetus is the enigmatic mountain range which circles the entire moon at exactly its equator. These mountains exceed the height of the Himalayas on Earth. In the above picture, they can be seen clearly. It's almost as though the two halves of this moon were "slammed together" at one time. We have no good explanation for this phenomenon.

The flyby on September 10 of this year produced some amazing images, among which is one showing a closeup of the "equatorial bulge" , and the other showing blindingly white, snowlike, "uncoated" part of the bright surface of Iapetus. I have reproduced them below.

Below is a quote by NASA: 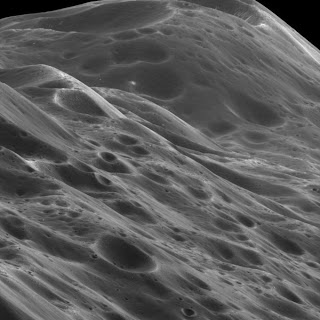 This close-up view shows mountainous terrain that reaches about 10 kilometers (6 miles) high along the unique equatorial ridge of Iapetus.
PASADENA, Calif. -- Scientists on the Cassini mission to Saturn are poring through hundreds of images returned from the Sept. 10 flyby of Saturn's two-toned moon Iapetus. Pictures returned late Tuesday and early Wednesday show the moon's yin and yang -- a white hemisphere resembling snow, and the other as black as tar. Images show a surface that is heavily cratered, along with the mountain ridge that runs along the moon's equator. Many of the close-up observations focused on studying the strange 20-kilometer high (12 mile) mountain ridge that gives the moon a walnut-shaped appearance."The images are really stunning," said Tilmann Denk, Cassini imaging scientist at the Free University in Berlin, Germany, who was responsible for the imaging observation planning. "Every new picture contained its own charm. I was most pleased about the images showing huge mountains rising over the horizon. I knew about this scenic viewing opportunity for more than seven years, and now the real images suddenly materialized."This flyby was nearly 100 times closer to Iapetus than Cassini's 2004 flyby, bringing the spacecraft to about 1,640 kilometers (1,000 miles) from the surface. The moon's irregular walnut shape, the mountain ridge that lies almost directly on the equator and Iapetus' brightness contrast are among the key mysteries scientists are trying to solve. 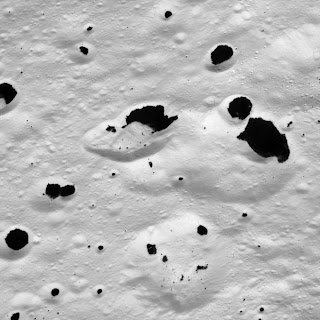 This image shows terrain in the transition region between the moon's dark leading hemisphere and its bright trailing hemisphere.
"There's never a dull moment on this mission," said Bob Mitchell, Cassini program manager, NASA's Jet Propulsion Laboratory, Pasadena, Calif. "We are very excited about the stunning images being returned. There's plenty here to keep many scientists busy for many years." "Our flight over the surface of Iapetus was like a non-stop free fall, down the rabbit hole, directly into Wonderland! Very few places in our solar system are more bizarre than the patchwork of pitch dark and snowy bright we've seen on this moon," said Carolyn Porco, Cassini imaging team leader at the Space Science Institute, Boulder, Colo. The return of images and other data was delayed early Tuesday due to a galactic cosmic ray hit which put the spacecraft into a precautionary state called safe mode. This occurred after the spacecraft had placed all of the flyby data on its data recorders and during the first few minutes after it began sending the data home. The data flow resumed later that day and concluded on Wednesday. The spacecraft is operating normally and its instruments are expected to return to normal operations in a few days. "Iapetus provides us a window back in time, to the formation of the planets over four billion years ago. Since then its icy crust has been cold and stiff, preserving this ancient surface for our study," said Torrence Johnson, Cassini imaging team member at JPL. Cassini's multiple observations of Iapetus will help to characterize the chemical composition of the surface; look for evidence of a faint atmosphere or erupting gas plumes; and map the nighttime temperature of the surface. These and other results will be analyzed in the weeks to come. Iapetus flyby images are available at: http://saturn.jpl.nasa.gov/ and http://www.nasa.gov/cassini and http://ciclops.org/.
The Cassini-Huygens mission is a cooperative project of NASA, the European Space Agency and the Italian Space Agency. JPL, a division of the California Institute of Technology in Pasadena, manages the Cassini mission for NASA's Science Mission Directorate, Washington, D.C. The Cassini orbiter and its two onboard cameras were designed, developed and assembled at JPL. The imaging team is based at the Space Science Institute, Boulder, Colo. RELATED MULTIMEDIA: Video file with animation, images and sound bites will air tomorrow on NASA TV. Contacts:Carolina Martinez 818-354-9382Jet Propulsion Laboratory, Pasadena, Calif. Preston Dyches 720-974-5859Space Science Institute, Boulder, Colo.
By JKM at September 13, 2007 No comments: