How far can you see? 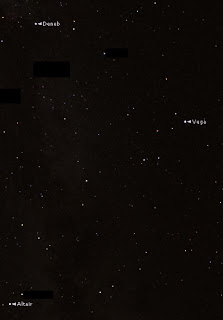 Are you interested in the stars (I don't mean Hollywood's superficial celebreties)? Have you ever wondered how far away they are? Do you think you need a lot of fancy equipment to see anything meaningful in the sky? Well, despair not, you too can be an "astronomer", and all you need is your eyes (and a clear sky).
The picture you see here is a simulation of a section of the nighttime sky as it appears at about 11pm at this time of year (created by a planetarium program called Starry Night Pro Plus, available at http://www.imaginova.com/). Click on the picture to see it enlarged. If you step outside at around that time of night and look up straight overhead, you'll see at least the three brightest stars shown here. They are labelled Vega, Deneb, and Altair. You can draw some imaginary lines between the three to form what's known as the "Summer Triangle", most readily seen in the summer and fall months.
All three stars are a lot bigger than our own sun, and, although they appear to be of similar brightness, they are located at vastly different distances from us. Vega, the brightest, is located at a distance of about 25 light years, Altair is about 17 light years away, and Deneb can be found at a distance of about 1,500 light years.
This begs a question. What, exactly, is a light year? The first thing to realize is that it represents a distance. How is that defined? Well, a light year is the distance that light travels in one year. The speed of light has been measured very accurately, it's just about 300,000km per SECOND. This means that light can travel around the Earth (circumference 40,000km) more than 7 times per second. There are about 31.5 million seconds in a year - so the distance of one light year is 31.5 million times 300,000km; it's a tremendous stretch. You do the math.
Since Deneb is 1,500 light years away, it took light 1,500 years to cover that distance. When the light we see now left Deneb, the holy Roman empire had just about disintegrated, and we were beginning to enter what has been called a cultural wasteland: the "dark ages". Similarly, the light which left Altair and Vega has travelled for the same number of years as they are distant (measured in light years, again). It's hard to imagine that Deneb is almost 100 times farther away than Altair, yet they appear almost equally as bright from Earth. What a tremendous difference exists between individual stars. We'd be fried instantly, if Vega were located as close to us as our own sun.
You can see that when you look at the stars, you are also looking backward in time. For all we know, these stars may have exploded by now (a common occurrance for huge stars); we won't know that until 25, 17, or 1,500 years from now, respectively.
What were you doing at the time the light left the stars mentioned?
You can understand the sky without any special equipment - you can see things that are a long way off. Your eyes and an open mind are all that's required. To really appreciate the grandeur of the universe, though, you ought to find a truly dark sky - a location away from the pervasive light pollution which wipes out all the faint stars in our cities.
By JKM at September 03, 2007 No comments: