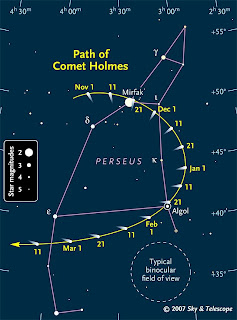 (click on the picture to see a larger version)

Figure 1 (from "Sky and Telescope" magazine.)


We have an unanticipated visitor in the night sky right now. I'm talking about the periodic comet Holmes. That comet orbits between Mars and Jupiter (right in the asteroid belt) and is normally very faint - too faint for many telescopes and certainly binoculars. Its orbit is tilted with respect to the plane of the orbits of the major planets and the average plane of the asteroid belt. As a consequence, the comet encounters the asteroid belt twice - once on the way "up" from "below", and again on the way "down" from "above" the planetary plane.

In the last couple of weeks, it has become very bright (relatively speaking), so that it can now be seen with the naked eye, and is certainly quite easy in binoculars. Some people have estimated its brightness at 2nd magnitude, whereas it is normally at 17th magnitude.

This brightness increase is unexplained at the moment. My hunch is that the comet collided with some asteroid or a large meteoroid. Something very similar was done artificially by deliberately crashing the "Deep Impact" probe into the comet Tempel 1.

You can find comet Holmes on a clear evening if you look to the northeast at around 8 pm (and it'll be visible all night long, as the sky turns through the hours, slowly making its way to the overhead, and later, northwest position). Make reference to figure 1 to find it in the sky. The comet is in a position in it's orbit which will keep it in the area of the Perseus constellation until about March 2008. Perhaps it'll keep up its brightness - comets are notoriously unpredictable in that regard. Use your binoculars to enhance the view. You'll probably see a fuzzy blob, quite distinct from the nearby stars.
By JKM at November 09, 2007 No comments: