Some examples of using a lens adapter 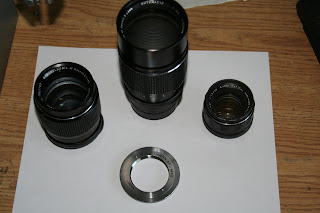 On January 16, Derek pointed to some interesting links. One of them relates to lens adapters. As Derek has mentioned in a previous blog, I used to be a studio photographer many years ago, and I have a 35mm film camera among my "collection" of things optical. That camera uses Pentax screw-mount type lenses, so it is about 40 years old. Derek's article prompted me to order a lens adapter for my Canon EOS XT Rebel digital SLR camera. At left, you see the adapter (bottom), and the three screw-mount lenses which I used in the photographic experiment described in more detail below. Not shown is a 2x "teleconverter" - an additional screw-mount lens which can be attached to any of the lenses shown, it "doubles" the focal length of all the lenses. The largest lens is a 200mm, f3.5 Bausch and Lomb lens, the smaller one is a 135mm f2.8 Bausch and Lomb, and the smallest a 55mm f1.8 Asahi Pentax lens.
The pictures below show is the effect of using the "full frame" screw-mount lenses have on the scale of the pictures generated in the Rebel XT, which has a "crop-factor" (APS-C dimensions are 25.1 × 16.7 mm and have an aspect ratio 3:2) type of CCD (it plays the role of the film in film cameras, see Derek's post on Aug 16, 2008). In general, the full-frame lenses act as lenses which appear to have a larger focal lengths, when used with a crop-factor cameras. The effect of a crop-type CCD is equal to "cropping" a 16x25mm section of a full (24x36mm) frame, seemingly "enlarging" a section of the full-frame image. Here are some examples: 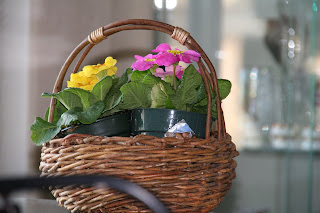 This is picture taken with a 18-200 Sigma zoom lens at 200mm and f6.3 - the "upper limit" of what this crop-frame lens is designed for. This lens has optical stabilization features, which makes hand held, longer exposure less like to be blurred by camera motion caused by my hand. 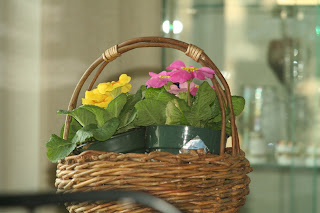 For comparison, this is the image from the full-frame 135 mm Bausch and Lomb lens, also set to f6.3 (nowhere near its "upper limit" of f2.8). The scale of the image is almost identical to that of the 200mm Sigma lens, above (just a tiny amount smaller). This lens has no image stabilization. Exposures are calculated and made just like I used to do in the days of "non-electronic" film cameras. There is no electrical connection to the automatic features of the EOS Digital Rebel. There is no automatic focus - it's done through the viewfinder. 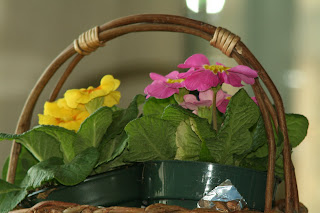 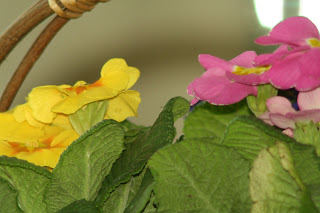 Here we have a picture taken with the 200mm Bausch and Lomb lens to which the 2x teleconverter has been attached. This makes it 400mm full-frame lens, which acts like 600mm crop-frame lens. Of course, the use of the teleconverter makes the f-stop markings on the lens incorrect. The doubling of the focal length requires a fourfold increase in exposure. In this case, to achieve the approximate equivalent of f6.3, I set the lens itself to f3.5 (its upper limit). 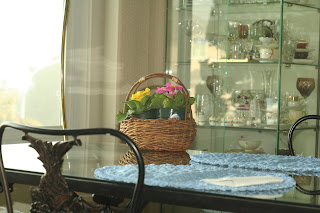 This is a picture taken with the 55mm Asahi lens, again at f6.3 (the upper limit if f1.8). This is a reasonably scaled standard image, with a reasonable angle-of-view. The effect is that of a 80mm crop factor lens. Derek presented me with a 50mm f1.8 Canon EF lens a couple of years ago, which gives a wider view angle, at the same speed (f1.8) as this lens.

The conclusion I draw from all this is that for the price of the lens adapter (about $75.00 after shipping and exchange rates are factored in), I have gained the ability to use my high-quality full frame lenses on my Digital Rebel. The equivalent Canon lenses would cost many hundreds of dollars. It's true that the "old" lenses do not have any of the interactive features of the lenses designed for use with EOS cameras, but this only means that I have to fall back on the techniques which I had to use in the the days of mechanical film cameras (calculating light levels, depth of field, exposure times, etc. in my head), before taking the picture. One advantage of the digital camera is the ability to display the picture just taken on the view screen, in the days of film, you had to wait until the film was developed and printed. In many ways, mentally calculating the required parameters prevents the "mental laziness" to which I succumb too readily when using the automatic features on my digital camera.

The use of the teleconverter effectively doubles the number of focal length capabilites, but there is a fair overlap with my crop-factor lenses, so that some of the combinations are essentially available twice. In any case I now have a fair number of possibilities. Generally, fixed focal length lenses tend to have a better optical quality, and much lower f-ratios - i.e. they are "faster", than the zoom lenses that commonly come with digital cameras of the Digital Rebel level, so if a given picture has to have critical definition, or is taken in low-light conditions, the use of the full-frame lenses may be a better option.
By JKM at January 23, 2009 5 comments: