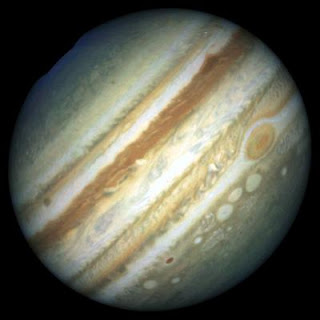 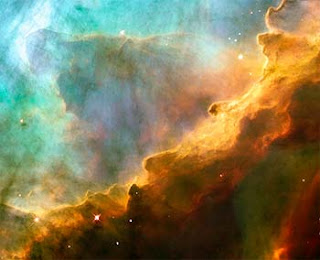 As most of you know, I'm sure, there are a number of satellites orbiting the Earth with astronomical purposes as their primary or only function. The most famous of these is the Hubble Space Telescope; who hasn't seen at least some of spectacular images that telescope has produced over the years? Above you see Hubble images of the planet Jupiter and the inside of a gaseous nebula known as M17 (In binoculars, visible as a small "blob" - both it, and Jupiter and its four big moons are easily seen from your back yard with binoculars, especially if they are attached to a photo tripod or similar support.)

There are a number of other artificial satellites making astronomical observations at electromagnetic wavelengths that do not penetrate our atmosphere (infra-red, ultraviolet, certain radio frequencies, etc...). A couple of these, the Spitzer and the Chandra space telescopes, were recently in the news with regards to "missing black holes".

Space telescopes provide data for basic research, and their resulting data sets have less direct application to everyday life, though some the published pictures resulting from their activities are aesthetically pleasing, and grace the walls of planetariums (planetaria?) and museums (musea?), and probably quite a few private residences the world over. They also have scientific value; so one can say that there is perhaps some direct effect.

There is another class of Earth satellites which very directly affect our lives - the "weather satellites". There are several which provide up-to-date weather information and make today's weather forecasts so much more accurate. For instance, here is an image picturing some pertinent current conditions relayed by one of those satellites. The International Space Station and NASA's space shuttle also have a role in this regard, many important weather pictures have been taken by people occupying these vehicles.

Information such as this helps people prepare for these occurrences, and saves many lives. While this is not astronomy activity in the strict sense, the technologies developed for astronomical purposes certainly have important applications in this field of meteorology (this name itself shows the connection, meteors are certainly considered to be astronomical phenomena).
Practical uses of science, for sure.
...
By JKM at November 04, 2007 2 comments: