During this month my wife and I went to visit good friends in California, and yesterday, our granddaughter Marina graduated from elementary school (http://www.flickr.com/photos/mimiandpapa/sets/72157627073520948/).

We quite enjoyed our visit to California; it is always good to see friends whom you've known for a long time.

Our granddaughter's graduation was a lively affair - followed by a dance from which parents were "disinvited". She is a lovely young lady now, her dad (http://www.penmachine.com/) would have been proud of her.  In fact, we had a hard time recognizing many of her school friends in their fashionable dresses; they looked so mature.

Looking at this from the perspective of our own age, we had nostalgic feelings about our own youth, now so long ago.

A bit of a sad day

As fathers' days go, this is a sad one today.
Since our son died on May 3, I will no longer be
getting a fathers' day card from him.

But, in future, the sad memories will be tempered
by the happy memories we have of our time together,
and this day will be bitter-sweet.
By JKM at June 19, 2011 3 comments:

Return what you borrowed

A month ago today, our son Derek died. His ashes will be dispersed in a couple of places on Earth which he considered to be some of the most beautiful.

We are all made of "star stuff"- the original hydrogen, and most of the other atoms generated eons ago in some stupendous explosion of a supernova. Our existence may be considered to be an assembly of these various atoms into the molecules which constitute you, me, Earth, and all the animals and things that surround us. When we die, these are all returned to some place in this universe - perhaps to become part of some other intelligent entity eons from now.

It is possible to say, then, that we only "borrow" the building blocks of which we are made. Derek's molecules are therefore in the process of being returned to where they came from. This resonates with me. 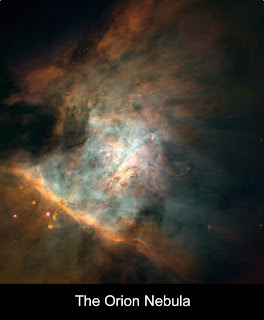 (pictured by the Hubble Space Telescope)
As some of you know, I've had a life-long interest in astronomy. New stars, nebulae, and planets are constantly being formed somewhere in the universe. One of those places is the Orion Nebula, pictured above. From now on, I'll forever look at the heavens with the thought in my mind that some of these future objects will incorporate some of the same atoms and molecules which were once a part of Derek.