This is the setup used for the eclipse pictures shown below. There was a constant, varying haze in the sky, necessitating some exprimenting with exposure times. The final phases were not captured, because solid clouds obscured the Moon in the end. 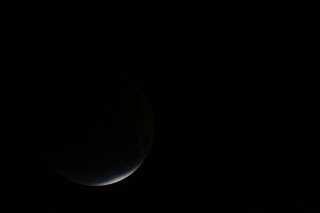 As mentioned before, this morning a total eclipse of the Moon occurred. I woke up just in time to witness and photograph the event. The above image shows the Moon just disappearing into the Earth's shadow.


This shows the Moon when it had moved well into the Earth's shadow: 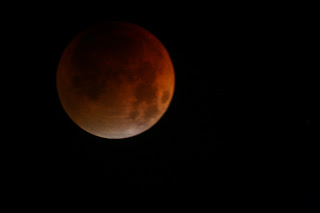 The orange tint is the result of the sunlight refracted around the Earth. As seen from the Moon, the Earth would seem to be surrounded by a "ring of fire" of this orange colour. It's like a sunset, except as seen from far away in space, with the whole Earth blocking the Sun.

The Moon is now at midpoint of the total eclipse: 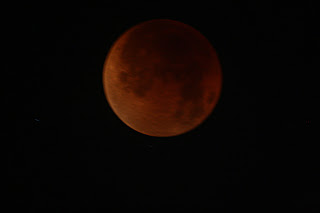 Taken with a Canon Rebel XT through a Celestron C90 telescope at f11 (= a 1000mm focal length telephoto lens - see top image) and an exposure time of 3.2 seconds, sensitivity at 800 ASA.

Added on Aug 31:
You'll notice that the Moon does not appear quite sharp in one direction here. The cause is the Earth's rotation.

There is a faint image of a star streak close to the left edge of the image. The length of this streak tells you how much the image shifted due to this motion during the 3.2 seconds. If I had used my "equatorial" mount, and attached the telescope and camera to it, there would have been no "smear"; that type of mount compensates for the rotation, and is used for those astronomical photos which require many minutes or hours of exposure time. 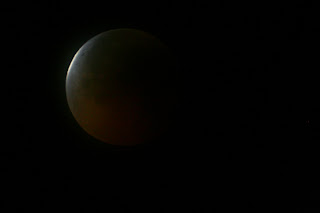 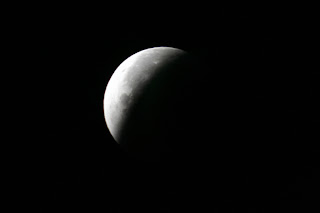