I've mentioned the Cassini probe, which has been orbiting the planet Saturn for about three years now, in a previous post. Among many other data, it has been sending a lot of information back about Titan, Saturn's giant moon (bigger than the planet Mercury), with its dense, other-wordly atmosphere.


Saturn's mysterious moon Titan is one of the strangest and most Earthlike places in our solar system.
Larger than Earth's moon and the planet Mercury ... it's the only moon in our solar system that has clouds and a dense atmosphere, mostly nitrogen and methane.
Titan's surface remained shrouded in secrecy below the clouds until July 2004. That's when NASA's Cassini spacecraft arrived at Saturn. With its RADAR and infrared imaging instruments, Cassini was able to lift the veil on Titan.
What scientists saw on Titan's surface astonished them.
Here was a world that looked a lot like home. Its surface is complex and varied, with Earthlike features like riverbeds; vast deserts, covered in dunes; and hydrocarbon lakes. These are the first open bodies of liquid found anywhere in our Solar System, besides Earth.
On Jan. 14, 2005, scientists got an even closer look. The Huygens probe, built by the European Space Agency, parachuted through Titan's atmosphere, taking detailed measurements. The probe survived for several hours on the surface of Titan and returned stunning images.
In spite of their apparent similarities, the differences between Earth and Titan are even more extreme. If you stood on the surface of Titan, the pressure would be like standing at the bottom of a swimming pool. The temperature is minus 289 degrees Fahrenheit (minus 178 degrees Celcius), far colder than Antarctica.
While rocks on Earth are made of silicates, the rocks on Titan are made of water ice.
While Earth's lakes and rivers are filled with liquid water, Titan's flow with liquid methane. In fact, if free oxygen were also present, a single spark would send the entire moon up in flames.
Most scientists agree that life as we know it would be unlikely on this bizarre world. But the study of Titan, the most Earth-like body in the solar system will help us understand our own Earth and even help guide the design of future missions, like Terrestrial Planet Finder, that are designed to search for Earth-like planets beyond our solar system.
The exploration of Titan has only just begun. Over the coming years, Cassini will fly close to the moon several dozen more times, gathering additional data and images, and unlocking more secrets of this strange new world ... an alien Earth in our own solar system.

Here are a couple of pictures of Titan's topology, returned by the Huygens probe, which was carried along with Cassini, and was released into Titan's atmosphere to descend by parachute to the surface: 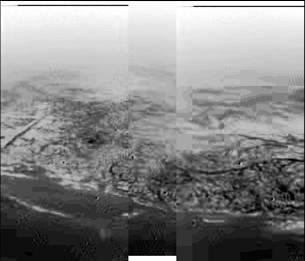 This composite was produced from images returned on 14 January 2005, by ESA's Huygens probe during its successful descent to land on Titan. It shows the boundary between the lighter-coloured uplifted terrain, marked with what appear to be drainage channels, and darker lower areas. These images were taken from an altitude of about 8 kilometres with a resolution of about 20 metres per pixel.
Credits: ESA/NASA/JPL/University of Arizona 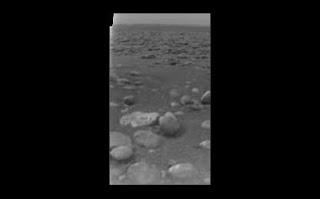 This raw image was returned by the ESA Huygens DISR camera after the probe descended through the atmosphere of Titan. It shows the surface of Titan with ice blocks strewn around.

It was taken with the Descent Imager/Spectral Radiometer, one of two NASA instruments on the probe.
The Cassini-Huygens mission is a cooperative project of NASA, the European Space Agency and the Italian Space Agency. The Jet Propulsion Laboratory, a division of the California Institute of Technology in Pasadena, manages the Cassini-Huygens mission for NASA's Science Mission Directorate, Washington, D.C. The Cassini orbiter and its two onboard cameras were designed, developed and assembled at JPL. The Descent Imager/Spectral team is based at the University of Arizona, Tucson, Ariz.
Credit: ESA/NASA/University of Arizona

You may also be interested in the following movie:


Imagine, rocks made of ice, liquid methane rivers and lakes, "colder than hades".

I see that Derek's not been posting for a couple of days. I'd like to assure everyone that he's doing ok. Last night he went to the Barcamp Vancouver and has gone again today. That's good news. It means to us that he has sufficient stamina to go through several hours of meeting and talking to people. Our niece is looking after the girls, and they've gone to a garage sale near our niece's home. We appreciate days like this.
By JKM at August 18, 2007 No comments: