On June 20, the Moon, Jupiter, and Venus appeared in the evening sky as pictured. Venus has been chasing Earth since the beginning of the year and is slowly catching up. Jupiter has moved from the middle of the night into the evening sky (largely due to Earth's motion around the sun - it's an effect of perspective).
Venus is the closest planet to us and orbits the sun inside the Earth's orbit, and therefore moves faster. It is almost the same size  as Earth, but its surface is submerged in an atmosphere which is about 90 times denser then Earth's. It's surface temperature is about 450 degrees C (900 F). It's a true hell (lead melts).
Jupiter is our solar systems largest planet. You could put about 1500 planets of Venus size into Jupiter. That huge planet orbits 5 times as far from the sun as the Earth. In this image, Jupiter is positioned on the far side of its orbit, and will disappear behind the sun in a couple of months. At this point, it is about six-and-a-half times as far away from us as the sun. 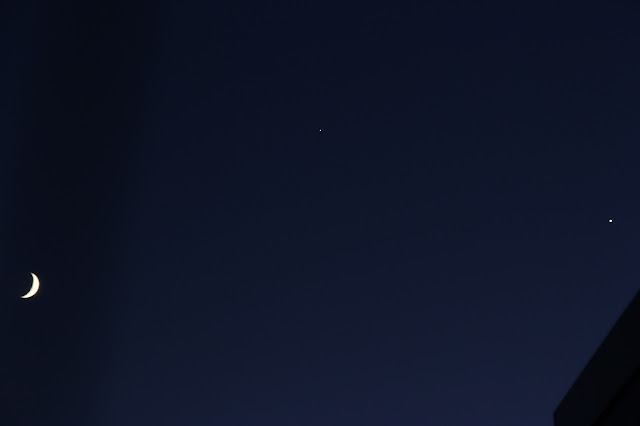 In the spirit of catching up: On the third of May we commemorated the 4th anniversary of our son's death from colon cancer - always an occasion for some tears.
On May 22nd, I turned 76. It's hard to believe, I still think that I'm in my prime. The little aches and pains accompanying old age say otherwise, however. So the truth is that I'm an old "fuddy-duddy". On May 29, I had a colonoscopy done, in view of our family history. Three polyps were found and removed. Fortunately, none of them showed any evidence of cancer.
Right now, both my wife and I are fighting a persistent cough; it makes sleeping restless. It's been making the rounds in our family - we're the last ones to "catch the bug".
At the moment, I'm involved in a process arranging the running of the new SFU astronomical observatory for it's portion of the Vancouver RASC's* time on the telescope. It's an observatory dedicated to both individual and public observing. More about this in a later post.
*Royal Astronomical Society of Canada
By JKM at June 24, 2015 No comments: