We celebrated our family Christmas with a wonderful dinner at my sister-in-law's again this year. There were also plenty of presents - practical for the adults and appropriate ones for the young ones. Among the presents we received I'd like to single out just one: Derek, Airdrie, Marina, and Lauren gave us a set of DVDs of the great series "Cosmos" by Dr. Carl Sagan. At the time it was first broadcast on TV (about 1980), Derek (who was then eleven years old) and I watched it with great fascination and admiration. It left a lasting impression on both him and me (See Derek's blog here: http://www.penmachine.com/2010/11/save-a-step).

I just finished watching the first three episodes again - the series has lost none of its significance and is in little need of updates. These are included as visual appendices on the DVDs. I still feel as I did the first time around and am hopeful that young people, many of whom were not even born when the series aired will have a good look at it. The series is available on youtube: (http://www.youtube.com/results?search_query=cosmos+carl+sagan&aq=0). While I admire the great strides technology has made since then (I am an electronics technologist myself), I think that quite a bit of its use is superficial and will have no lasting meaning.  By contrast, the Cosmos series has "staying power"; it will impart a much more realistic perspective of life to our younger generation.

Watching the "rerun" (from my perspective), I was transported back to the time I first watched it  - with family memories coming to mind, along with the changes in our family since then: Derek (and our nieces) growing up, getting married, having their own families, etc. - nostalgia.

Also today, they continued their tradition of baking some "Pullaa"(Christmas bread) with grandma Mimi.
http://www.flickr.com/photos/mimiandpapa/sets/72157625654207184/.

Perhaps these occasions will be something they'll remember fondly when they've grown up and have their own families - long after we're gone.
By JKM at December 22, 2010 No comments: 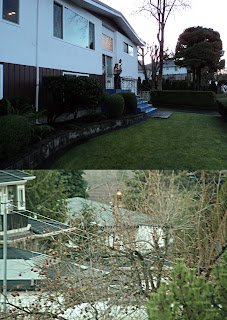 (click on picture for larger view)
Our granddaughter Marina has taken up the baritone horn for the school band, and is very diligent about practicing for the school Christmas play. She has a friend in the neighborhood who lives half a block away, and who plays the flute for the band. Both of them have been practicing together. Yesterday they played their instruments far apart, Marina from our front steps, and her friend from the balcony at her home. They could see and hear each other, but communicated mainly by cell phone. Who but the new generation would have thought of doing it this way? I'm really proud of the imaginative ways these two think. There is hope for the future.

Along these lines, another comment: we have a party room in our house, and Marina and her sister Lauren play there quite often. Their play is always original and inventive, and it does not involve video games, but often they select music on the juke box and integrate that music into their play. We are lucky to have Derek, Airdrie, and the two granddaughters (by now young ladies) next door. It keeps us young.
By JKM at December 10, 2010 No comments: