For those of you interested in seeing a phenomenon in the sky without the need for a telescope or binoculars:

This weekend we have the annual re-appearance of the Perseid Meteor Shower. What we should see (barring cloudy skies and too much light pollution from surrounding lights) is the "burning up" in the Earth's atmosphere of tiny particles which Earth encounters every year in its orbit around the Sun. The "debris" which the Earth encounters at this time each year is shed by a comet which also orbits the Sun, named Swift-Tuttle (the discoverers). If you are located away from the big cities, and have a clear sky, you might see a "falling star" once a minute, or so. In the cities, you'll only see the brighter ones, but there is always a possibility of a really bright "fireball". The maximum "rate" is expected on Sunday night, into Monday morning.

Look towards the north-east when the sky gets dark. Here are two images of the same area generated by the "Starry Night" computer program simulating the view at about 11:15pm. The Perseus constellation is pictured just below centre in each image. The lines connecting the stars are imaginary, they don't exist in reality. Click on the pictures for a larger view:

As you would see the sky away from the city. 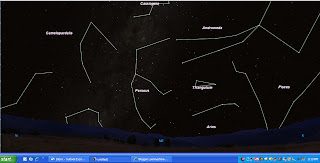 
The frequency of falling stars will increase after midnight, when the Earth's rotation carries you you around to a more "head-on" direction. This is the direction into which the Earth is heading on its way around the Sun.

The Perseids get their name from the constellation from which they appear to come, called the "radiant". This purely a perspective effect; the stars which comprise this constellation are infinitely farther away than this comet-debris, which originates in the solar system. As the night progresses, this radiant moves higher and higher into the sky, due to the Earth's rotation.