A moonrise from the window

Having just returned from California, it is a nice surprise to have a beautiful, clear day and evening - free of all the smoke. Even more lovely was the full moon rise over the northeast mountains, as viewed from our living room window (see picture). 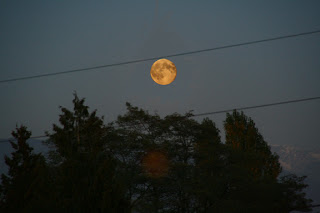 The picture on the left was taken through a double-paned window and shows some faint smudges and reflections as a result. It is actually a combination of two pictures, one exposed to show the bushes, trees and mountains, the other to show the details in the moon's "face". In the first picture the bushes and mountains are correctly exposed, but the moon is overexposed and shows no detail. In the second picture (not shown in this posting), the moon is correctly exposed, but the bushes are barely visible. Consumer type digital camera CCDs do not have the dynamic range of the human eye; the eye perceives detail in both bright and dark areas at the same time. Using Photoshop, the two pictures were combined to give the same impression that I had when I looked at the scene. 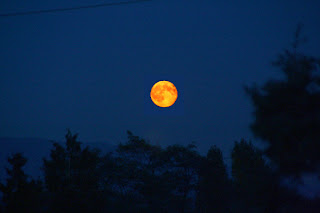 This picture is one of several which were taken from the front steps a little later. The histogram of the moon's image in this picture was adjusted to bring out the detail, and the contrast in the whole picture was increased to enhance the appearance of the bushes. This is a single picture, not the combination of two. It played no part in the combined picture above.
By JKM at October 26, 2007 No comments: