Time with the granddaughters

Since Derek and Airdrie are at Gnomedex, we have our two granddaughters to look after these days. Thursday we explored the new Canada subway line to the airport, yesterday we spent all day at the PNE (we sat on the grass for the "Beatle Anniversary" performance, too). Big crowds. 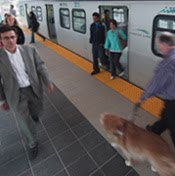 The "Canada Line" day was an all-day event for us. We decided that four of us would take public transport to get to all the places we were going to visit. The "Skytrain"is our elevated/subterranean remote-controlled light rapid transit line which has existed since the year of "Expo 86" (i.e. 23 years), and has become an integral part of the public transportation system in our "lower mainland" cities. One of its larger stations is located a 10 minute walk away from our house, so we walked and bought a day pass for all of us. At a total of $27, that turned out to be a bargain.

To begin with, we rode the skytrain to the Waterfront station, and then changed to the Seabus (a ferry service to North Vancouver, part of the public transportation system), to have lunch at Lonsdale Quay. The kids and my wife picked their traditional Chinese food; I don't particularly like Chinese food and ate a more traditional sandwich instead. Our older granddaughter also bought a new pair of shorts. We then returned via the Seabus to the Waterfront station, which is also the terminus of the new Canada Line subway.


The trains on that line consist of two cars (all pictures below are from the Translink web sites), connected by a "flexible" passthrough, much like subway trains in other parts of the world. The stations on the Canada line are just long enough to

accommodate their combined length, so coupling two of these trains together would make them too long for the stations. The Canada Line train cars are wider than the Skytrain cars, making the cars incompatible with each other's stations. In fact, I don't know of any track connection between the two. That makes it necessary to have two different parts and maintenance centres. Personally I find this incompatibility illogical. I can understand that such incompatibilty might exist in some of the older cities in Europe, which started their electric subway services over one hundred years ago, but the skytrain line is still young (23 years), and the underlying remote-control technology cannot be that 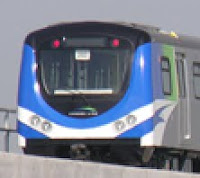 Another question I have is the use of only a single track into the airport itself - it means that only one train at a time can be at the airport station. I suppose that the underlying reason is the same as always - money, money, money. There was a big "Ahead-of-time, on-budget" statement from both our provincial government, and the public transit authority, made possible only by what I consider "corner-cutting"; even the underground track section which was originally meant to be a "bored" tunnel was actually built using the "cut-and-cover" method. That caused a great deal of financial losses to, and the closure of a number businesses along the Canada Line. Courtcases are still pending in that regard.

Notwithstanding all the above, the ride to and from Richmond and the airport is smooth, efficient, and will likely become popular with the commuting public and travelers from the airport to downtown. While most of the line is underground, the elevated and above-ground sections offer a grand view of Vancouver's spectacular scenery (that's true for the mostly elevated Skytrain too, of course).


The PNE (Pacific National Exhibition) is the granddaughters' perennial favourite. While the younger one is more interested in the rides at Playland, the older one is developing a taste for the agricultural and "arts-and-crafts" aspects. Our granddaughters' maternal grandparents (we're the paternal ones) are both wonderful and accomplished people and very artistic, and they really involve the granddaughters in that way when they are staying with them.

An added feature this year was an open-air performance in honour of the Beatles - on their 45th anniversary. The theatre grounds were jammed with people. The band "Revolver" performed ably, and had the crowd highly motivated - everyone seemed happy. The amazing thing is that our granddaughters knew and sang along with all the songs; we ourselves, being of a generation well ahead of the Beatles, could not do that.

Marina (the older one) is also developing a talent for photography. She has a camera cellphone and took some interesting and artisic pictures: http://www.flickr.com/photos/thebigm/.