For many years, astronomers, physicists, geologists, and scientists in other disciplines, as well as science fiction writers, have speculated whether there are planets circling other stars, much like our star (the Sun) has a retinue of large and small planets circling it. Our Earth is one of those planets. The ultimate aim is to establish whether there are other planets (exoplanets - not part of our solar system) which could perhaps have liquid water on their surfaces. We see liquid water as the absolute basic necessity for life as we know it, although we are beginning to see variations of life even here on Earth which may perhaps lead us to a possibility for other life forms, not necessarily requiring water.

In any case, the underlying reason to look for Earth-like planets elsewhere is to come up with a reason to think that life is present throughout the universe (at the moment, we have absolutely no evidence that life exists elsewhere).  Exoplanets have been known to exist for a couple of decades or so, but they are very hard to detect and the first ones we knew about were extremely large and could be called "failed stars".

There are a number of telescopes in orbit which are specifically designed to look for the extremely small effects which such planets have on their "suns".

http://www.astro.ubc.ca/MOST/  - This is a Canadian project, directed by Dr. Jaymie Matthews of UBC, which has detected some exoplanets as a serendipitous byproduct of its main mission (to measure tides and wave propagation in distant stars).

It has just succeeded in detecting one exoplanet which is just slightly larger than Earth, albeit unlikely to be earth-like. This is the news release from NASA:
http://www.jpl.nasa.gov/news/news.cfm?release=2011-007&cid=release_2011-007&msource=11007&tr=y&auid=7605855 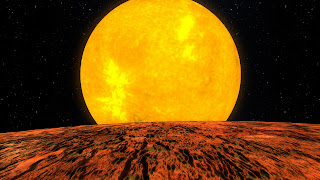 It'll have a profound impact on human thinking if we ever find another planet on which intelligent beings are present. If we ever get into direct contact with such a "civilization" the course of human evolution may be permanently altered.
By JKM at January 10, 2011 No comments: