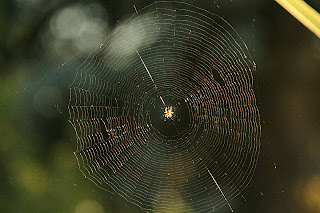 The weather has been marvellous for the last two weeks or so. We take advantage of this; we have breakfast on the back porch or the courtyard, eat lunch and supper there, all surrounded by sunshine and flower pots (meticulously tended to by my wife), and generally enjoy the summer. In the late afternoon, we pull down a sunshade. About an hour before sunset we noticed a little spider's web, being illuminated by sunlight at just the right angle, which a little spider had put up after we had lowered the sunshade. It was suspended from that sunshade, and the downpipe from the roof. The web must have been constructed within an hour by that little spider. The sunlight passed through the web just like through a spectroscopic grating - which breaks up the light (like a prism) into its constituent colours, mostly reds, because the sun was so low in the sky. It was worth a picture.

The web stayed there for a couple of days (we took care not to disturb it when rolling up the sunshade); in all that time we saw a trace of only one "catch". It seems like a lot of work for that little spider to find only one meal in all that time. Then, the next morning, both web and spider had disappeared without a trace. Did the spider "eat up" the web, so that it could spin another one somewhere else?
By JKM at July 31, 2010 No comments:

Sure signs of summer

This week is forecast to be clear and sunny all the way. Today we placed the weeping hoses around the hedge and hung the sunshade for the back porch (our favorite place on days like this). The porch has no windows, but has a solid cover with just one smallish glass window. Those of you who attended Derek's birthday party last weekend will remember, no doubt, because his side is the mirror-image of ours (both sides are only separated by a door - usually open). Also set up the large sun-umbrella, table, and chairs in the courtyard below.

The porch is south-facing, so the temperatures there are usually about three to four degrees (C) higher than in the courtyard and inside the house. They tend to correspond to the "inland" temperatures which are forecast on the local stations. As I write this (11:40 am), the temperature on the porch is 28 C. We've been sqwaking about the cool temperatures up to now, so we got what we wished for.
By JKM at July 07, 2010 No comments: