Last week, I referred to the landing of the Phoenix probe in the "Arctic" regions of the planet Mars. Since then that lander has been put through a number of engineering tests and its cameras have taken a number of pictures of both its surroundings and the terrain underneath its landing spot.

The rocket thrusters which brought Phoenix to a stop just as the lander was touching Mars' surface (meaning that it didn't crash) have blasted away some of the surface material under the lander and appear to have exposed what may be the expected layer of water ice which Phoenix was sent to explore and analyze. Phoenix' robotic arm has also used its scoop to dig in an area next to the lander. That arm will be used to dump some of the material into an on-board system of analyzers. The aim is to establish whether it was ever possible for some kind of life form to have existed (or possibly exists now) on Mars, and whether direct human settlements on Mars may happen in future.

For more details, link to:
http://www.jpl.nasa.gov/ 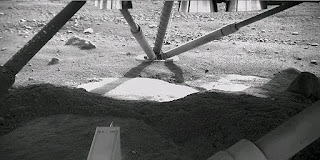 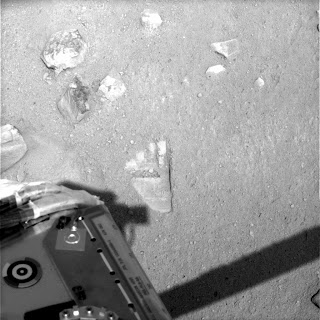