This last Saturday, the Vancouver Parks Board set up a public evening called "Night Quest" at the Pacific Spirit Regional Park. It involved naturalists talking about creatures of the night, and also included sky watching. To that end, the Vancouver Centre of the Royal Astronomical Society of Canada (RASC) was invited to participate. We had about 10 of our members (including me) set up telescopes in a parking lot which unfortunately is surrounded by trees and affords access to only a limited area of the sky. None-the-less, we could look at the planets Venus and Jupiter through the trees (no leaves yet), and occasionally also see the Moon. There were hundreds of people who got a glimpse of these through one or the other of the telescopes. My own scope was trained on Venus all evening. At the moment, Venus is in a position of its orbit around the Sun (as seen from Earth) which makes it look through a telescope like the first quarter moon. Many people mistook it for the Moon at first glance, and were amazed to see that Venus could look like that. Lively discussions followed regarding why such a thing happens. I think some people gained a much better appreciation of the geometry of our solar system.

Later, clouds covered up the sky, and we put our telescopes away. Just as the event ended at its scheduled time, the sky started to clear up again. We get suckered in like that quite often in this city.

I enjoyed the evening, explaining things astronomical to the public. I find that this is what I like most about doing astronomy now: public events, or astronomy nights with other members at our standard venues. These events are all open to the public. The scientific contributions I used to make when I was in my teens and twenties (mostly regarding variable stars) are no longer my main interest in that field.

There are several interesting astronomical events coming up this year. Two interesting ones are an "annular" eclipse of the Sun late in the afternoon on May 20 and a transit of Venus across the Sun (again, as seen from Earth). The best place to see the annular eclipse would be for us to go to Redding, California, or Reno, Nevada, but we'll see a partial solar eclipse from Vancouver, too. The other event, the transit of Venus directly across the Sun on June 6, will again happen late in the afternoon. It will be visible from Vancouver, starting about 5 pm, and lasting into sunset.  Spanish Banks or any place with an open view of the Salish Sea (Georgia Straight) is a good spot from which to observe. This is the second of a pair of transits 8 years apart. The last one (the first of this pair) occurred on June 8, 2004.  The first one of the next pair happens on December 11, 2117, the second one of that pair on Dec 8, 2125.  I  don't think that I'll wait for those. 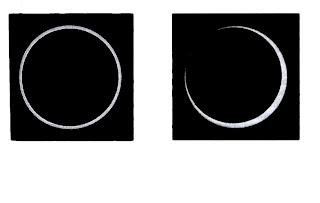 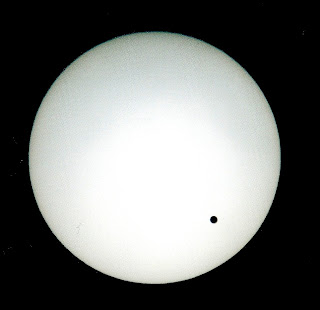 This image of the transit of Venus was taken by Murray Paulson, of St. Albert, Alberta,  at Hersonissos, Greece, on June 8, 2004

Both images taken from the Observer's Handbook 2012 published by The Royal Astronomical Society of Canada, editor David Chapman, printed in Canada by Webcom, Inc.
By JKM at March 26, 2012 No comments: