Ode to our kitchen

We subscribe to both the Vancouver Sun and to the weekend edition of the Globe and Mail newspapers. The VS spplies us with topical, local news - the GaM has an interesting editorial page and also three commentators who we both like equally (I've always wondered about that word: should it not be commentors ? We don't "commentate", we comment) - Margaret Wente, Jeffrey Simpson, and Rex Murphy. Of these, I'm making a special reference to Margaret Wente here. 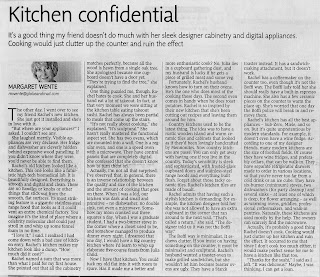 The image shows Margaret Wente's article, as scanned from the Globe and Mail - click on it to read.

In this weekend's edition, she writes about designer kitchens and refers to her own cluttered and old-fashioned one, much like our own kitchen here (see below). Her point is that many of the designer kitchens are "showpieces" only, they are often not used for the kind of family cooking which we all enjoy and have the privilege to have access to. 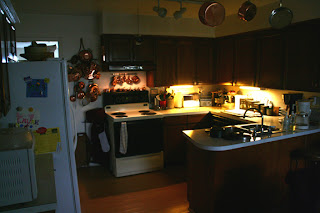 Our own kitchen - it is as old as our house. The electrical appliances are newer, but were bought to match the needs of such a "working" kitchen. Many times, it has fed all of us when we had family gatherings at our house (see below).

I have had a number of occasions to see working kitchens in houses where really good cooks do their thing; they all look like ours. As you know from my previous post, I have a wife who really does know how to cook - this kitchen is her domain. I stay out of it - my cooking prowess is limited to toasting bread and boiling eggs. I will fix any of the appliances if they break down, and will also repair whatever plumbing needs work, though. 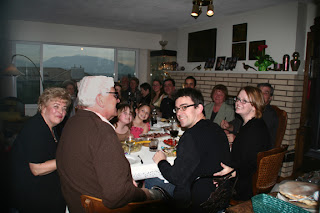 Here's some of the crowd which is often fed by my wife's cooking, produced in our "old-fashioned" kitchen. Our family dinners are sumptuous, with additional contributions from our son and daughter-in-law, my sister and sister-in-law, brothers-in-law, extended family and family friends., all of whom produce their food in kitchens just like ours.

Let's hear it for the "working kitchen"!