Yesterday, my wife and I stopped by Granville Island for lunch, and to pick up some fruit and vegetables at the Granville Island Market. The little over 1 pound of cherries we bought came prepackaged in a cardboard box (the proprietor emptied them into a plastic bag after we had purchased them).

Today, we had some of them as a snack. About 20% of them exhibited some marked deviations from the norm. Several had some "outgrowths"; some of those suggested another cherry (an identical twin, if you like) which did not develop properly. A couple of them were actual twins, and the weirdest one had some hairy growth breaking through its skin (see picture at left, below). I broke open the one with the hairy outgrowth (see picture at right). It looks to me as though there may have been a new cherry tree in the making - perhaps the cherry was germinating while still on the tree. Any ideas? 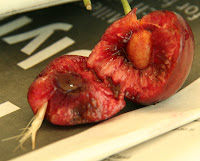