The solar flare of Monday, Feb 14

Near the centre of the image is the white flare which sent a massive amount of energy to Earth a couple of days ago.
I looked at the Sun through my Hα telescope yesterday but the flare is not visible in Hα light; however, the disturbed area where it originated on the Sun is. In particular, the "striations" at the centre of this image are visible in Hα. 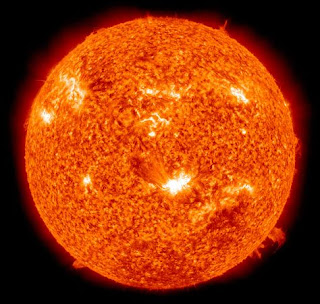 ultraviolet image
Image from SDO/NASA
Caution: Never look at the Sun with the naked eye! All events on the Sun must be viewed through special protective filters; these reduce the light to about one thousandth of one percent (=1/100,000).
Here's a pertinent article published by National Geographic Magazine:

Ted Chamberlain
National Geographic News
Published February 16, 2011
The most powerful solar flare in four years exploded over the sun late Monday, according to NASA.
The magnetic instability that caused the flare also unleashed a blast of charged particles that should hit Earth's atmosphere tonight, possibly sparking auroras farther south than usual, experts say.
(Video: Solar Flare Causes "Sunquakes.")
The most powerful explosions in the solar system, solar flares occur when magnetic field lines on the sun cross, cancel each other out, then reconnect.
These "explosive reconnections" release huge amounts energy as heat—in this case, a short blast measuring roughly 35 million degrees Fahrenheit (19 million degrees Celsius), according to physicist Dean Pesnell, project scientist forNASA's Solar Dynamics Observatory, or SDO.
In visible light, only the small dark surface blotches of sunspot 1158, which spawned the flare, could be seen. Without the SDO satellite, "you would never have known what was happening above" the sunspot, Pesnell said.
But the satellite's ability to detect many wavelengths of light allowed the observatory to image not only the flash, in extreme ultraviolet, but also streams of charged gas arcing along magnetic field lines—a "perfect example of solar physics." (See a January picture of a large solar flare.)
Not that SDO is perfect. Its digital-imaging hardware, for example, was overwhelmed by the intensity of the flare, resulting in overexposed areas that make the flare look bigger than it was.
Imaged flawlessly, the flare, at its most intense, would "look like a ball of light floating above the surface," Pesnell said, "about the size of a house."
(See pictures of solar eruptions.)
Solar Flare Plus Aurora-Inducing "Wind"?
Monday's fleeting magnetic breakdown also sent "a firehouse of material spraying out from the sun" when "spring loaded" streams of charged gases were freed from the magnetic fields that hold them in place on the sun.
Such so-called coronal mass ejections can pose radiation threats to astronauts and overwhelm Earth's magnetic field, potentially disrupting satellite communications and power grids on the ground.
But the solar gale now heading our way isn't expected to be particularly harmful. That's because, according to predictions, "it won't hit us dead-on," Pesnell said.
Still, he said, strong geomagnetic activity is expected Wednesday night, perhaps most visibly in the form of auroras—the southern and northern lights, which occur when atoms above Earth's gain energy from solar charged particles, then release it as light.
The U.S. Space Weather Prediction Center, he said, forecasts a 30 percent chance of auroras as far south as Washington, D.C.
Stargazers below the northern U.S. should look for a diffuse reddish glow, however, rather than the neon-hued "curtains" seen around the Poles. Furthermore, the nearly full moon will effectively dim any auroras Wednesday night.
(Pictures: Huge Solar Storm Triggers Unusual Auroras.)
X-Rated Solar Flare
Monday's blast was the first X-level solar flare since December 2006—X being the highest level of the flare-rating system.
But at X2.2—or 0.00022 watts per square meter—the Valentine's Day flare wasn't unexpectedly powerful.
"It fits in just perfect" with forecasts that show the sun entering a period of increased activity, Pesnell said.
The recent explosion, he added, has nothing on the giant blasts of the early 2000s. That most recent active period spawned the biggest solar flare on ever directly measured in November 2003—a blast more than ten times as powerful as Monday's.
Compared to that "big honker," he said, this week's flare "is pretty typical—except it was beautifully typical, because we saw it with SDO."
For more on solar flares, sunspots, and solar wind, read "The Sun—Living With a Stormy Star," from National Geographic magazine >>
By JKM at February 20, 2011 1 comment: