As most of you know from my previous post, one of my hobbies is astronomy. Every now and then, I take a some photos, too.

Last night, seeing that there wasn't a cloud in the sky, I decided to set up scope, and attach my DSLR (digital single lens reflex) camera to it. The reason is that that telescope follows the rotation of the sky (caused by the turning of the Earth); astronomical photos normally require several seconds to many hours of exposure time, because we're dealing with very faint light here. Therefore, the camera has to follow the night sky, otherwise the images get "smeared" by the sky rotation.

As it turned out, after only about 3 seconds, the stray light in this city - in my neighbourhood caused by a large shopping centre nearby - and the myriad of unshielded streetlights which throw so much wasted light into the city sky caused the picture to "wash out". Some of this can be overcome by using the current graphics programs (i.e. Photoshop) to overcome some of these problems. Here's an example: 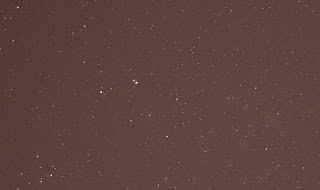 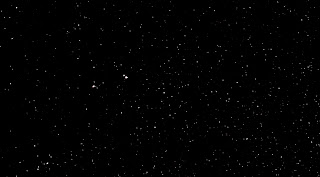