Many of you know that I've had an interest in Astronomy since I was eight years old. I seem to recall that the impetus for that came from a book my father was reading while in hospital - a couple of months before he died (that hospital visit then is one of the few concrete memories I have of him. He was also interested in astronomy - so, in a way, I believe that I'm honoring his memory). The book ("The Moon" - Nasmyth and Carpenter) was describing the theories of the cause of the huge mountain ranges and the thousands of craters which cover the Moon. 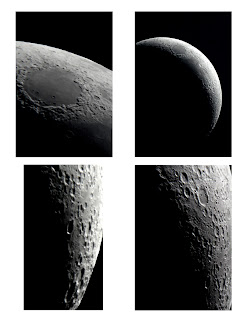 At that time it was unclear that the cause for their existence is the constant collisions of the Moon with the "space debris" still present in our solar system (ranging from minor planets, through asteroids and meteors, to the "shooting stars" which can be seen on any clear night when away from the light-polluted night sky of our cities). The book contained a picture of an artificial little crater, created by dropping little pebbles into half-dried mud - or some such method. What amazes me is that I remember the book (it was the German translation) so well, after more than 60 years - and that, when entering the English title and names of the authors into Google, the first hit was a direct link to some information about that book.

For some reason, the "crater" picture triggered my interest - and I'm still interested. Nowadays, I own several telescopes and binoculars, and can look at these craters at any time the Moon is in the sky. In those early days, the thought of owning a telescope did not even enter my mind; it was way beyond what we could afford financially. None-the-less, as soon as I could, I joined our local astronomy club, and I've been a member of one ever since.

My current affiliation is with the Vancouver Centre of the Royal Astronomical Society of Canada. We welcome everyone to our monthly meetings, member or not, because one of our mandates is the promotion of an interest in astronomy and related sciences. Feel free to visit our meetings and participate in the public displays and use of telescopes to explore our place in the Universe. Here's a link to get further information: