I just had a look at the pictures of his visit to Burnaby Lake our son posted on Flickr. Among them are some pictures of the main railroad tracks which run near the lake. Here's what caught my eye:

This is safe? Only one spike instead of what obviously calls for two, at least 20mm above the track flange. This is a most heavily used track. What prevents the rail from tipping over when a heavy train travels on them?


Barbra's comment (below) prompted me to have a quick look at European rail construction. I did a quick search on the internet. Here's what I found almost immediately: 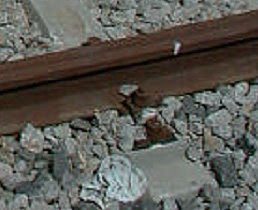 They use concrete ties (no wood) and bolt their tracks to them. I see no "play" between the bolted brackets and the rail. This looks like a seldom used spur line (consider the rust on the top of the rail). The Europeans appear to secure even their little-used tracks in this fashion.