Maybe there is life here, too?

Here's an image from the Galileo orbiter which circled Jupiter at the time. Europa is an ice-covered moon of Jupiter (in order of increasing distance from Jupiter: Io, EUROPA, Ganymede, Callisto) 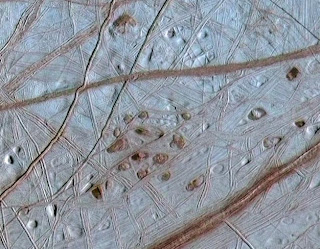 . This picture shows a small area on Europa, bringing out the details of ridges, furrows, spots, all of which is much speculated about. The general consensus appears to be that there is an ocean of liquid water underneath all this, and that the observed phenomena relate to upwelling and gravitational warming of this ice ("squeezing" by Jupiter and those other moons). If there is water, is there a chance for some kind of "life"?

Original Caption Released with Image:
Reddish spots and shallow pits pepper the enigmatic ridged surface of Europa in this view combining information from images taken by NASA's Galileo spacecraft during two different orbits around Jupiter.
The spots and pits visible in this region of Europa's northern hemisphere are each about 10 kilometers (6 miles) across. The dark spots are called "lenticulae," the Latin term for freckles. Their similar sizes and spacing suggest that Europa's icy shell may be churning away like a lava lamp, with warmer ice moving upward from the bottom of the ice shell while colder ice near the surface sinks downward. Other evidence has shown that Europa likely has a deep melted ocean under its icy shell. Ruddy ice erupting onto the surface to form the lenticulae may hold clues to the composition of the ocean and to whether it could support life.
The image combines higher-resolution information obtained when Galileo flew near Europa on May 31, 1998, during the spacecraft's 15th orbit of Jupiter, with lower-resolution color information obtained on June 28, 1996, during Galileo's first orbit.
The Jet Propulsion Laboratory, a division of the California Institute of Technology in Pasadena, manages the Galileo mission for NASA's Office of Space Science, Washington, D.C. Additional information about Galileo and its discoveries is available on the Galileo mission home page at http://galileo.jpl.nasa.gov .
Image Credit:
NASA/JPL/University of Arizona/University of Colorado
By JKM at August 16, 2007 No comments: