Some additional information: I took some trial shots on the last clear sunny day, but found that it was nearly impossible to focus the image accurately. This is due mainly to the small screen on the Canon XT DSLR. When downloaded onto the computer and displayed on the screen, the images were somewhat out of focus.
The camera can be connected to a computer so that at the time of taking the pictures, the image is captured to the computer and displayed on the screen after a few seconds delay. The software for this is on the CD that came with the camera, and I downloaded a program from Canon which allows remote control of the camera from the computer. This way, the shutter can be released from the computer. Now I'm waiting for a clear day to experiment with that. A clear day may be a long time coming here. We're more than half way through fall; rain is the norm at this time of year. Below is an example of the "tuning" referred to in my previous post: 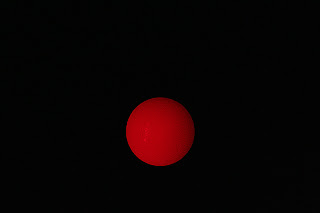 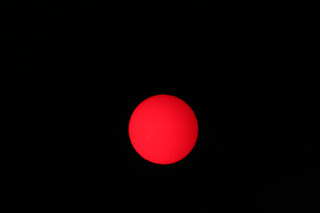 prominences (lower edge - no enhancement)
These are a first try - refinement is necessary.
By JKM at November 14, 2010 No comments: