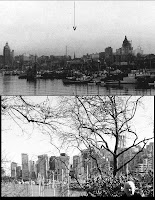 Derek's post of October 13, referring to the change in the Vancouver skyline over the last 50 years or so prompted me to dig out a couple of my own pictures of the Vancouver harbour view. I photographed the top image in 1956, the bottom one dates from 2008. Both pictures were taken from the same spot (within a couple of meters, or so). While the cameras and angle-of-view for the two source images are very different, I made an attempt to crop and resize the pictures in such a way as to make them appear similar. Click on the image for a larger view.
The change is astounding. The only edifice I can discern in both pictures is the spire of the Holy Rosary Cathedral on Dunsmuir Street in downtown Vancouver. The arrow in the top picture points to it. You can also spot it among the high rises in about the same relative position in the lower picture.
The two tallest structures in 1956 are the Vancouver Hotel on the right, and the Marine Building on the left. Both buildings are still in existence, but they are obscured by the newer high-rise buildings which have since sprung up.
Ah, progress!!
By JKM at October 14, 2009 No comments: