As mentioned in my last post, we've spent some time with friends in California, and travelled there by car. We returned yesterday, taking four days to come back, and driving along some of the roads less travelled.

While the American interstate highway system goes through some magnificent scenery (the view at left is of Mount Shasta), the smaller roads offer some wonderful, sometimes unexpected views of nature as well.


As an example, we stayed in Calistoga, a small city in the Napa Valley of California (this area is known as one of the top wine-producing areas in the world). The hotel was a beautifully restored place, reminiscent of high-class hotels of about 100 years ago, mixing "Art-deco" and "American-West" styled rooms with present-day wireless internet access, DVD players, and TV in every room. 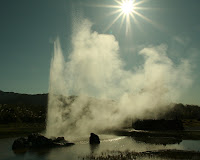 On our way out, just outside of town, we stopped at a place featuring the smaller sibling of "Old Faithful" (in Yellowstone National Park, Wyoming), also called "Old Faithful", seen at left. This geyser erupts every ten minutes or so. Each eruption is preceded by about a minute of bubbling, gurgling sound, not unlike that of our electric coffee maker at home. The geyser is located on private land, so we had to pay some admission ($6 each); we considered it well worth the experience. Since we had arrived early, we were the only visitors and could look at the geyser, the museum and videos at leisure and without interfering with anyone.

During our travels, the other amazing thing to consider was the fact that all the roads on which we travelled were either blacktopped, or concrete-covered. The picture shows the road through a part of California's famous Redwood Forest. If you consider the immense road system in the USA alone, how much does this represent in natural resources and evironmental alteration? How could the majority of people learn to appreciate these natural wonders without such cost? 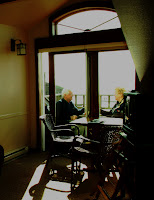 Our vacation ended on a beautiful and romantic note. We headed to Cannon Beach (Derek's family's favourite vacation spot), on the Oregon Coast, for our last evening "on the road". It happened to be the day of our 44th wedding anniversary. Accommodation was in a beachside hotel room with balcony, looking west over the Pacific Ocean. With a bottle of red Oregon wine, and a couple of piccolos of champagne, we had a nice, sunset French "Dinner" on the balcony (consisting of French bread, some cheeses and sausage, rather more like an elaborate picnic). This was a fitting end to a trip which included the reunion with many good friends and good times with them.
By JKM at April 19, 2009 No comments: