A few days ago, some members of our local astronomy centre of the RASC and I set up telescopes for teenagers with cancer at Camp Goodtimes in the UBC research forest. We did this in an open field next to Loon Lake.

We set up starting at the beginning of dusk. It seems that we had been eagerly awaited - not only by the people, but even more by the resident mosquitos. These little pests must have internet access, because they must have known that we were coming. They had organized themselves into a veritable airforce, complete with attack squadrons.
The squadron leader (from Wikipedia): 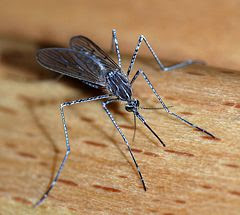