The Beauty of Saturn

Those of you who read an earlier blog entry of mine know that one of my hobbies is astronomy. Besides scientific exploration, and a quest to find out our place in the universe, astronomy can also have real artistic value. As an example, here's an image transmitted from a NASA probe orbiting the planet Saturn, showing a "solar eclipse". This is an occasion when the probe (called Cassini) travels through Saturn's shadow, which means that the Sun is behind Saturn from this point of view. Therefore, Saturn appears here "backlit", something that can never be seen from Earth. Anyone who's ever seen Saturn through a telescope will realize that, though the view from Earth is impressive, Saturn looks quit different in this picture. It's almost like a "negative" image. If you click on the picture to enlarge it, you'll also see a faint, tiny blue dot to the left of Saturn outside the brightest part of the ring and inside the first faint "dust ring". That is the Earth, as seen from Cassini at the time, over 1000 Million km (620 Million miles) away. It is humbling to think that all humanity, it's joys and sorrows, are concentrated in this insignificant pixel. You may need to look at the picture in subdued surroundings, bright light will "swamp" the tiny image of the Earth.

Anyone interested in technology, as I am, will appreciate the immense amount of engineering and technical know-how it took to make it possible for anyone to view this picture on his or her computer (rocket flight, communications, internet, computer, and many other techniques, including software, etc...). We tend to take all these things for granted, but even one glitch in the technological chain would prevent this picture from reaching you. It is a testament to human ingenuity to have this view. See an enhanced version of this image at Seann's blog (that link shown in the accompanying comments section. Click on comments below) 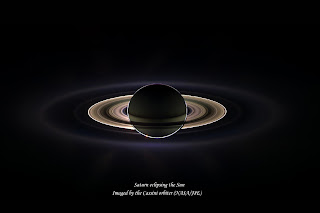 http://www.nasa.gov/mission_pages/cassini/multimedia/index.html
This is the URL for more images from Cassini and other "Saturnalia"

It didn't take long for Derek to resume his activities on his blog. For those of you who haven't already found out, here's the link: http://www.penmachine.com/

Nobody could be happier than we are. Blogging will likely channel Derek's mind back to his community, and you'll have all pertinent information first hand.

In any case we'd like to thank all who take an interest in Derek's current problems for your support and concern. As parents, it is gratifying to know that Derek has so many friends.
By JKM at July 14, 2007 1 comment: