The end of the gravel road 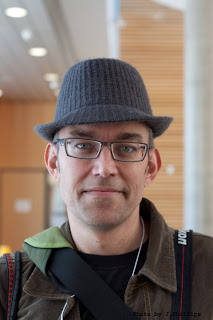 Our son Derek died in the evening of May 3, 2011. He had to deal with metastatic colon cancer for four and a half years. Our family is immensely saddened, and his death will leave a large void among us. He will be deeply missed by all of us.

Derek had an extremely unique intelligence, and a multitude of interests. All his friends, and we, could ask him almost any question and he would have an intelligent and easily understood answer. His blog http://www.penmachine.com is a testament to his extensive knowledge and eclectic thinking. Through his blog, he a affected a multitude of people, and many commented on how his posts had helped them deal with adversities of their own. He was a very knowledgeable technologist - he had extensive knowledge in computer and internet technology, photography, was a musician and composer, had a degree in marine biology, and a diploma in writing (both from UBC). Writing was his passion. 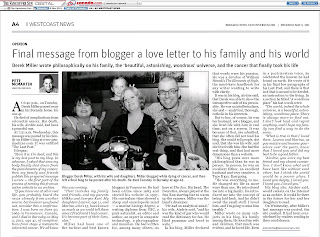 (click on the image)
No medical treatment, including several operations and many sometimes very debilitating chemotherapy treatments could stop this cancer. Throughout these years he maintained his interests and wrote about them in his blog. It never became a "cancer blog".

As his parents, we have lost our only child - a part of us died with him. We are lucky to have his wife and our two granddaughters living next to us. For us, Derek lives on in them.
By JKM at May 05, 2011 36 comments: