As I've mentioned before, this year is designated as International Year of Astronomy (IYA). To that end, the Royal Astronomical Society of Canada (RASC - I've been a member for more than 30 years) is undertaking many public activities, free for all to take part in. Worldwide, there are many astronomy associations and educational institutions involved in the same activities.
After several locally scheduled events were "rained out" lately, last night turned out to be more promising. A clear evening was predicted by Attilla Danko's "ClearDarkSky" program which uses data from Environment Canada's weather forcasting system.
Things turned not quite as clear as predicted - there were thin, hazy clouds drifting across the sky all evening. However, they were transparent enough to show the brighter objects, one of which was the planet Saturn. Three of us were slated to run this meeting, and two of us had committed to set up our own telescopes at the H.R. McMillan planetarium for this date, so I set up my Celestron C-8 in front of the Gordon Southam observatory. The third member in our group operated the observatory telescope itself. 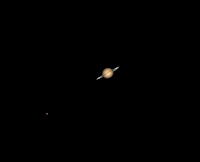 This year, Saturn's rings are seen almost edge-on. That's a consequence of the tilt of Saturn's axis of rotation with respect the plane of its orbital plane and generally all the major planets' orbits. This presents some interesting viewing since some of Saturn's moons, most of which orbit Saturn in the same plane as its rings, can occasionally be seen crossing Saturn's disk, along with their respective shadows. Since the hazy clouds had a detrimental effect on seeing some of the very fine details through the telescopes, such an event would be somewhat difficult to perceive. However, the rings and Saturn's bright moon Titan were easily visible. To the left you see what Saturn and Titan looked like as seen through a telescope, at a magnification of about 90 power. Click on the picture for a larger view.
There were more than 100 people who took advantage of the occasion - some had been attending a show at the planetarium, others just happened to be out for a walk. Many had never had a look through an astronomical telescope, and were very impressed about what could be seen. It's amazing how interested people are in what's going on in space; many just don't know how to meet people with similar interests. So this get-together fulfilled its primary purpose of bringing these people together. Some enquired about how they could get more involved. Here is one possibility: the RASC member meetings and sky observing sessions are open to the public, and are free. If you become a member, there are a number of privileges which you'll enjoy. In Canada, for more information, go to http://www.rasc.ca/, and pick the link to your closest local centre. If you live elsewhere, look for an astronomy club in your area - IYA is a worldwide effort.
By JKM at March 22, 2009 No comments: