This weekend was another one with several highlights. On Friday, my wife and I attended another 100 year school anniversary, this time it was my wife's elementary school's turn. She attended in the 1940's.

On Saturday, we spent a few hours with my "Texas cousin". She is visiting one of her daughters who lives in the Seattle area. Also visiting was my cousin's other daughter, whom we hadn't met before. It was a beautiful day so we drove there, and a good time was had by all, including my cousin's two young grandchildren. Our Nexus pass proved its worth once again - we crossed the border in about a minute (same on the way back). People without the pass had about an hour's wait in line in each direction at the time.

Yesterday (Sunday) a special space-related event took place. Since you must know by now that astronomy and space are part of my hobbies, that event had me watching the Mars landing of the probe "Phoenix" on NASA TV via the internet in "real time". The planet Mars, from the Earth's perspective, it's on its way to its farthest point away from us, "behind" the Sun, at which time it'll be invisible from Earth. Right now, Mars is about 270 million kilometers (roughly 170 million miles) away. As a result, due to the restriction imposed by the speed of light (300,000 km/sec - about 186,000 mi/sec), it took the radio signals confirming the successful landing about 15 minutes to reach us. You could imagine a telephone conversation with someone on Mars, which would take 30 minutes just for you to know that your call was answered ("Hello, Peter" - your voice takes 15 minutes to get to Mars - "Hi John" [the reply] which takes another 15 minutes to come back to you). Radio signals are the same as light (they just differ in their wavelength), and travel at the same speed. There is nothing that we know of which can exceed this velocity.

Because of this restriction, there was no way to control the actual descent of Phoenix to Mars's surface from Earth - Phoenix had to make all critical decisions on its own. The actual landing sequence was complete (it took 7 minutes) and Phoenix had safely landed well before the first signals confirming the start of the landing sequence were received on Earth.

The whole thing is just marvellous, and a testament to the ingenuity of the engineers and scientists involved. Details can be found at 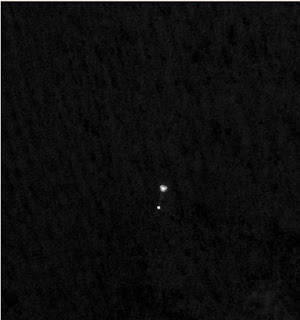 The two pictures show Phoenix during its actual landing, before separating from its parachute. I enhanced the smaller inset from part of the larger image. This picture was taken by the high-resultion camera aboard the Mars Reconnaisance Orbiter (MRO). That camera normally looks straight down onto Mars to record its surface details; for this picture it was set to an angle of about 64 degrees from vertical. There was a roughly 40% chance that this photographic attempt would succeed. Phoenix was about 310 km (193 miles) away from the MRO. Amazing!


picture and overall mission control by: NASA/JPL-Caltech/University of Arizona.
By JKM at May 26, 2008 No comments: