Last night, as mentioned in one of my previous posts, the last total lunar eclipse for the next three years took place. The weather had been predicted to be cloudy, but about an hour before totality, the clouds started breaking up. Derek and I set up our cameras on our back porch, from where we had a clear angle of view. As the eclipse progressed, the cloud holes got bigger and bigger, so that by the time of totality we got a clear view for almost the whole length of the total phase. Clouds started to roll in about six minutes before the end of totality, and we missed the partial phases which followed. 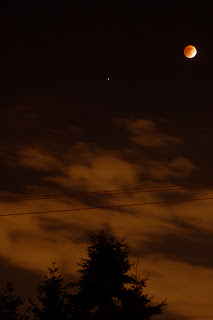 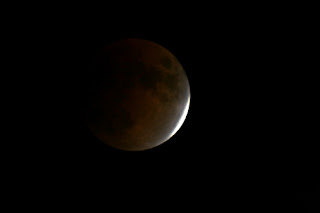 About four minutes before totality. The sharp edge of the earth's shadow appears at the lower right of the moon. Exposure was 3/10 of a second at f11. 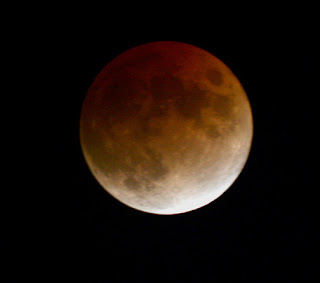 Derek and I got about 100 pictures between us. I was using my tried and true Celestron C90 telescope, coupled to my Canon Rebel XT (350D), Derek his Nikon D50, with a 210 mm zoom lens. Derek's images are here.
The picture (left) shows the moon around the middle of the total eclipse. The lower edge is brighter because it is nearer the edge of the earths shadow, through which the moon was moving at the time. Exposure time was 1 second, ISO 800, the scope is a fixed f11, 1,000mm focal length. Because the Rebel XT has a CCD area smaller than that of a 24x36mm film, the effect is about like that of a 1,500mm telephoto lens.

Usually, when the weather forecasters are wrong, the error leans towards bad weather. This time, they were wrong and it turned into better weather - I can live with THAT. To see the eclipse, after expecting not to, felt like serendipity.
By JKM at February 21, 2008 No comments: