After much hype in the media, the actual preplanned collision of the LCROSS (NASA's Lunar Crater Observation and Sensing Satellite)with the Moon was a visual disappointment for me. At first I was contemplating setting up my 200mm (8 inch) telescope, using my "new" eye, but advance information suggested that the telescope would have to perform at its very limit, and in excellent conditions - i.e no light pollution, absolutely clear and dark sky (an impossibility in this light-polluted city of Vancouver). I therefore decided to watch the NASA coverage instead, if I were to wake up around 4:15 in the morning. Well, I did watch it, but the images sent down from the Moon did not show me any impact. I've watched the replay several times, but to no avail.


Later today, NASA published more pictures, after analysis and using images from a "medium infrared imager" (MRI) camera. It showed the impact a little better, but I saw no sign of the calculated 10km debris plume, which was to expose any water ice possibly located in the permanently shadowed impact crater. 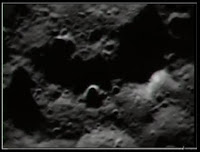 Here is the impact image the way I saw it. It shows the visible light image - the way you and I would see it if we were on board of the LCROSS satellite. I can't identify any crash. 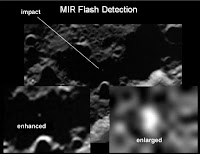 This is the MIR image. Infrared shows hot spots a lot better, but the human eye cannot perceive infrared light.

Here is an excerpt from NASA's media advisory describing the mission:

MOFFETT FIELD, Calif. -- NASA's Lunar Crater Observation and Sensing Satellite, or LCROSS, created twin impacts on the moon's surface early Friday in a search for water ice. Scientists will analyze data from the spacecraft's instruments to assess whether water ice is present. The satellite traveled 5.6 million miles during an historic 113-day mission that ended in the Cabeus crater, a permanently shadowed region near the moon's south pole. The spacecraft was launched June 18 as a companion mission to the Lunar Reconnaissance Orbiter from NASA's Kennedy Space Center in Florida. "The LCROSS science instruments worked exceedingly well and returned a wealth of data that will greatly improve our understanding of our closest celestial neighbor," said Anthony Colaprete, LCROSS principal investigator and project scientist at NASA's Ames Research Center in Moffett Field, Calif. "The team is excited to dive into data." In preparation for impact, LCROSS and its spent Centaur upper stage rocket separated about 54,000 miles above the surface of the moon on Thursday at approximately 6:50 p.m. PDT. Moving at a speed of more than 1.5 miles per second, the Centaur hit the lunar surface shortly after 4:31 a.m. Oct. 9, creating an impact that instruments aboard LCROSS observed for approximately four minutes. LCROSS then impacted the surface at approximately 4:36 a.m.
By JKM at October 09, 2009 No comments: